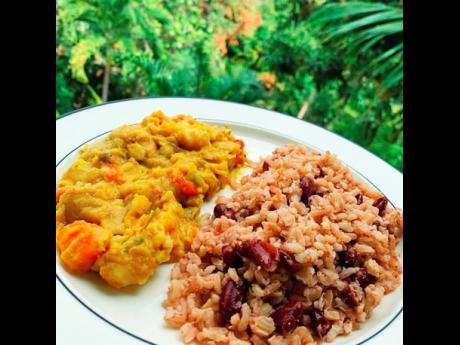 American Film Actor Robert Urich once said, “A healthy outside starts from the inside.” Since we have zero control of the outside, with disasters like the COVID-19 pandemic and the recent surge of Sahara Dust over the island, let’s shift our focus indoors. The best way to achieve optimal function is by maintaining good mental and physical health. That is, decreasing the stress factors to provide comfort and increasing immune-system boosters, physical activities, and good nutrition through the elimination of unhealthy comfort foods. Welcome to part two of the Canopy Health Insurance and certified Health and Fitness Coach Kamila McDonald’s recently launched joint initiative, Camp Canopy.

The duo that gave you the J-Nine Smoothie and the split peas soup is back to share the Apple Cider Anti-inflammatory Tea; Protoje’s Jerk Surprise and Chakula’s King Alpha Broad Beans Stew and Rice and Peas. These recipes contain immune-boosting ingredients. Enjoy.

Apple cider vinegar contains beneficial bacteria and probiotics that can have a positive impact on immune health. It also has antibacterial properties that can fight off pathogens that wreak havoc in your body.

Direction: Mix everything together in a pot (except the honey and the cinnamon) and bring to a boil. Stir in cinnamon and honey based on your preferred level of sweetness. Enjoy!

Did you know? A one-cup serving of pak choi provides 140 per cent of your recommended daily allowance of vitamin A and over 75 per cent of vitamin C. Other nutrients include iron, calcium, manganese, and folate.

Directions: Preheat pan on medium fire, add coconut oil then vegan strips to the pot. Turn as desired. Add liquid aminos and allow strips to fry. Meanwhile, add another pot of water to the fire, and allow it to boil for a few minutes. Once the water is boiling, add the noodles and cook them. After the vegan strips are done, allow them to cool then cut them in small pieces and place in a bowl with two ounces of jerk sauce (or as much as desired). In the same pan, add coconut oil to a medium flame and sauté the onions, scallion, garlic, sweet pepper, and turn regularly until slightly crispy and you begin to smell the flavours. Add the chopped veggie strips to the same pan, two tablespoon of liquid aminos, and two tablespoons of jerk sauce to the pot. When the noodles are ready, add them to the pan with the veggie strips or tofu and stir until fully flavoured. Add a splash more of liquid aminos and pak choi,and continue to stir until everything is blended. Add tomatoes and keep mixing for about five minutes. Turn the fire off and allow it to simmer then enjoy.

Broad beans are packed with compounds that may enhance antioxidant activity in our body. Antioxidants play a major role in boosting our immune system and fighting diseases.

Directions: Soak the broad beans and red peas overnight. Pour the water off from the beans. Add fresh water and cook the broad beans until soft. While the broad beans are cooking, dice the potato and cut up the pumpkin, carrots, and okra. Cut the dried coconut into small pieces, and blend with water. Strain the coconut milk. When the peas are beginning to get soft, add the chopped items and the Scotch bonnet pepper. Allow the pumpkin to “mash out” and form the body of the stew. In a separate pot, boil the coconut milk for 10 minutes and then add all the seasoning items. Pour some of the seasoned milk into the pot of stew and stir well until it has a thick consistency.

Brown rice and peas directions: Add the remaining amount of coconut milk to the red peas. Beat the head of the scallion and ears of garlic. Add this seasoning and the Scotch bonnet pepper to the coconut milk and peas and bring to a boil with a tip of salt and two teaspoons of coconut oil. Add the brown rice (ensuring that there is approximately an inch of water/liquid above the rice) and allow to boil. After most of the water has been absorbed, turn down to a low flame until the rice grains swell.