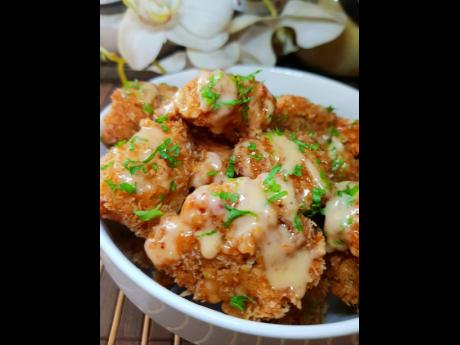 Contributed
The bang bang chicken is topped with sweet Scotch bonnet sauce and garnished with parsley. 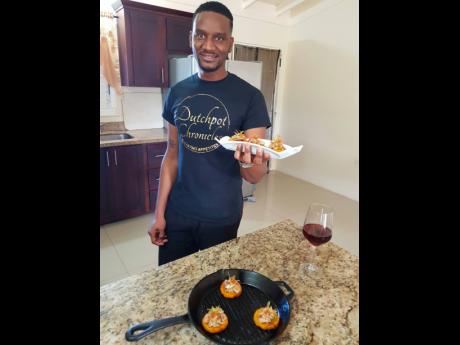 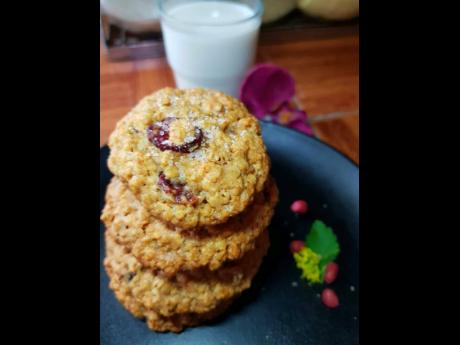 Contributed
Kenrick Barnett recommends pairing these craisin, peanut and oatmeal cookies with a glass of milk. 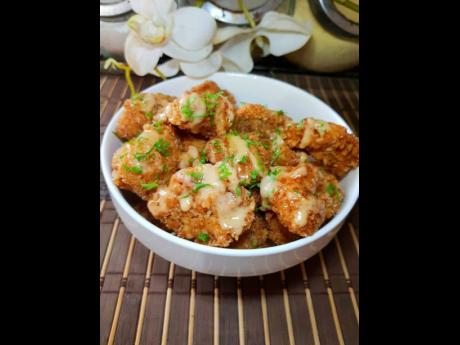 Contributed
The bang bang chicken is one of the culinary artist’s favourite recipes. 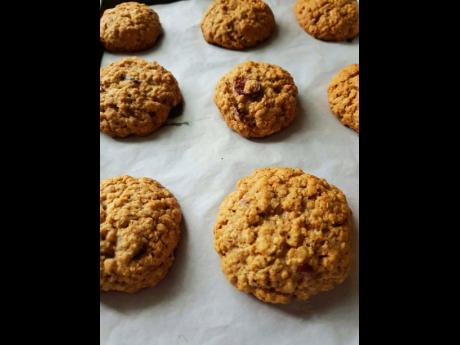 Contributed
Whether you’re leaving cookies out for the gift giver in your life or satisfying a craving for something sweet, Barnett has a craisin, peanut and oatmeal cookie recipe for you.
1
2
3
4
5

When you hear the word ‘dutchie’ or ‘Dutch pot’, the first thing that comes to mind is a well-seasoned, ‘yaad style’, home-cooked meal.

Bringing this tradition to life by chronicling his journey through blogs, inclusive of recipes, is Kenrick Barnett. According to the culinary artist, as he has dubbed himself, his passion for food is innate. His mother was a sous chef by profession, and his grandmother was a cook. If he were to, however, put a time on when it all started, he would say that his adventures in food began at seven years old; but it took him resigning from his nine-to-five job to give cooking his full attention.

“It was originally meant to occupy my time in the interim of job hunting, but actually birthed my original blog on Tumblr,” he told Food.

Barnett said he started a food blog to document his Sunday meals and it just bubbled into something greater. Now, having developing his skills in the kitchen for the last six years, he is enticed by the artistic side, like food styling and food photography.

“I decided to delve into the culinary arts arena with a focus on styling and presenting Jamaican cuisine in an eclectic way,” he revealed. And nothing beats the rich and refined taste of his dishes. From soups and meats to sweet delights, you name it, Barnett can whip it up in no time!

As a Christmas gift, he has shared two of his signature recipes for you to try for yourself at home this season.

1 cup buttermilk (you may substitute with regular milk)

2. Massage seasoning into the chicken and refrigerate overnight or for a few hours.

3. For the sauce, combine mayonnaise, honey, Scotch bonnet pepper and lemon juice in a food processor and pulse until smooth.

4. Pour sauce into a bowl and season to taste with salt and black pepper, then refrigerate.

5. Remove chicken from the refrigerator and let sit until it reaches room temperature.

6. In the interim, heat the vegetable oil in a Dutch pot or skillet over medium heat.

7. Whisk together flour, cornstarch, egg and buttermilk in a large bowl and add Panko to a separate bowl.

8. Dip chicken into the flour mixture and let it rest for approximately one minute. Remove chunks and add to Panko. Drench in Panko until fully covered.

9. Fry chicken chunks in batches for two to three minutes per side or until fully cooked through and golden brown.

10. Drain on a wire rack then drizzle with sweet Scotch bonnet sauce and garnish with parsley.

3 cups old-fashioned oats (you may substitute with regular oats)

1 cup craisins (you may substitute with raisins)

2 eggs (substitute with 1 tablespoon ground flaxseed and 3 tablespoons of water, to make it vegan)

3. Using a hand-held mixer, cream together brown sugar and butter in a bowl until fully combined (about two minutes). Add one egg and mix, followed by the next egg, along with vanilla, and mix again.

4. Add flour mixture to butter-sugar mixture and mix until fully combined. Mix in oats, craisins, and peanuts until evenly distributed.

5. Scoop dough, using a small ice cream scoop or tablespoon, and shape into balls. Transfer to the baking sheet, 12 per sheet, two inches apart. Place the baking sheet in the refrigerator for 20 to 30 minutes, which helps to prevent the cookies from overspreading.

6. In the interim, preheat oven to 350 degrees Fahrenheit, remove cookies from the refrigerator and bake in the preheated oven until golden brown around the edges, approximately 13 to 15 minutes.

7. Let cool on the baking sheet. Serve with a cold glass of milk and enjoy!