Photographer capturing the world of mixology 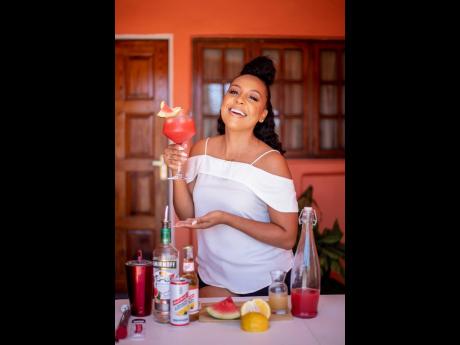 Contributed
Photographer Nicolina Diabo is shaking things up in mixology.

Creatives on the local photography circuit know Nicolina Diabo as a consummate professional who holds her own among what has long been a male-dominated field. Few know that this talented photographer is also fluent in another creative language that can be understood anywhere in the world. Diabo is an expert mixologist, satisfying palates with complex recipes and complementary flavours, one drink at a time. Now more than ever, she is enjoying her craft, which is somewhat of a deviation from her initial path.

Many moons ago, Diabo had her heart set on becoming an internationally acclaimed chef and began to pursue this path by studying hospitality with a major in food and beverage management. However, she veered into mixology and photography after being introduced to the arts. “I fell in love with it during college, and I even got a chance to work in bartending before I went into photography. At that time, I worked at a company called Top Shelf,” she recalled.

Diabo bought her first camera, which she used to capture photos of the tantalising practice dishes and drinks while she was studying. Pretty soon, it became her saving grace after she completed her degree and could not find a job. One day she attended a wedding, where she met a photographer and was immediately impressed by his set-up. While talking, she mentioned that she had a camera, and as the discussion continued, to her surprise, he offered her a job.

Photography took over, morphing into a career of more than five years. Still, Diabo kept the mixology flames alive, holding a deep and abiding love for the craft. “For me, mixology has become an avenue to show off my creativity in mixing flavours. Each drink represents me,” she declared.

Her photos are tangible proof of how innovative she can be, and it’s no different with her drinks. Diabo likes to experiment with flavours and shares her concoctions through her YouTube channel and Instagram page. These platforms are currently a public house for her to treat others to something fun and refreshing.

“I typically look for inspiration through content on social media and whenever I see and consume something. And sometimes, I just sit and think about products that would pair nicely with each other and then try it out. Most recently, I was inspired to swap sparkling wine for a flavoured Red Stripe beer to create my version of a spritzer, one of my favourite drinks,” she explained, pointing to the mixability of the Red Stripe Lemon Paradise and Melon.

Diabo likes to put her feet up and enjoy a chilled glass of sangria, a cocktail infused with wine, fruit, and a spirit. “It’s perfect for me and meets all my requirements for a flawless cocktail. It has a spirit and is paired with a taste that complements the base (spirit) well and a nice garnish to make it look beautiful,” said Diabo, adding that she cannot say no to a glass of margarita, whiskey, or Bellini’s.

Diabo dreams of touring the world simply to visit restaurants while pairing some of the best-tasting dishes with the most delicious cocktails.