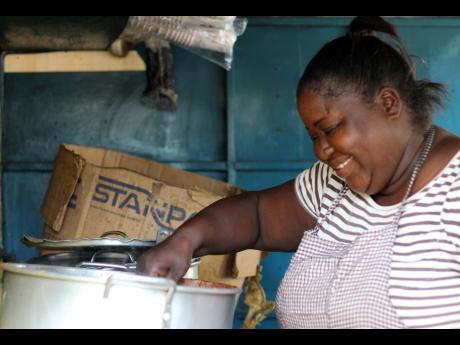 Stephanie Lyew
Denese Knibbs-Hall’s smile is as warm as a cup of soup. 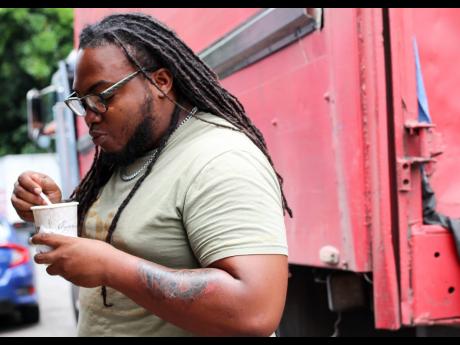 Stephanie Lyew
Long-time supporter of Mama Bev’s soup spot, Fabian McKenzie, may not be a fan of cow skin, but he enjoys the flavours it adds to the red peas, peanut soup. 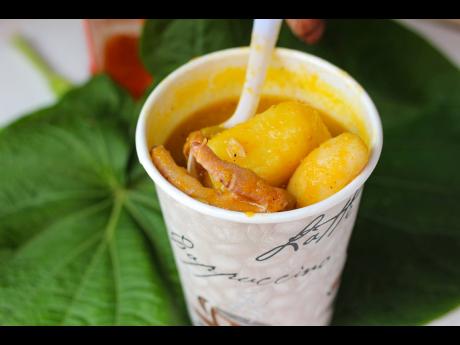 Stephanie Lyew
A rich pumpkin soup with chicken foot is the right picker-upper for someone feeling down. 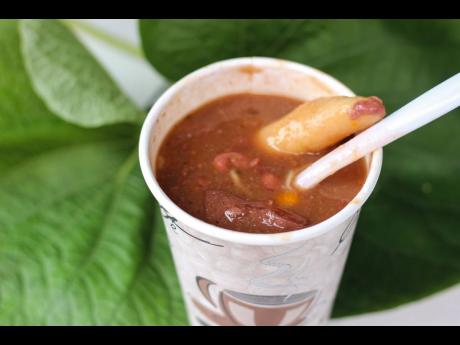 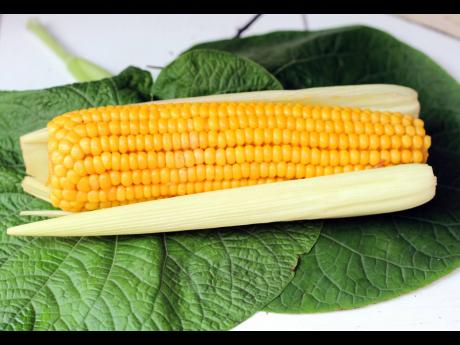 Stephanie Lyew
Boiled corn, well-seasoned by the spices of the pumpkin soup, is another sweet and tasty bellyful.
1
2
3
4
5

Fewer foods are more associated with Jamaican culture than soup, and Mama Bev’s in Friendship Gap offers quite a bellyful with a menu including goat head, pumpkin chicken foot, and a special red peas soup, with chicken foot, cow skin, and peanut.

Only a forty-five minute drive from Manor Park, Kingston, this little roadside joint has been a popular pit stop on the Junction Road for over four decades. Soup is a Saturday staple for Jamaicans, but for Mama Bev’s, the pot is always bubbling, said Denese Knibbs-Hall, who is the daughter of the owner, known to all as ‘Mama Bev’. “We’ve been here for years. My mother is the master of mixing up the soups,” Knibbs-Hall told Food.

As one approaches the modest yellow and blue shop, one is greeted by a warm smile from Knibbs-Hall that warms the spirit like a fresh cup of soup. “Goat head, pumpkin-chicken foot, and the combination of red peas, chicken foot, cow skin, and peanut” is the menu she reads out for the day. “There is boiled corn, sprat, and fried breadfruit if you’d like,” Knibbs-Hall continues, noting that her mother has taught her well in the art of soup-making.

Mama Bev’s pumpkin soup is a mix of a bevy of flavours. The first is smoked thyme, and the second is an earthy blend of select seasonings with hearty vegetables. Tempted to know the secret, I asked Knibbs-Hall about the ingredients, but she would not reveal her secret ingredient.

It is difficult not to be taken in by the location of Mama Bev’s — the fresh air, the leaves of trees rustling, and the overall friendliness of the people (no wonder it is called Friendship Gap). It will make anyone want to take the road trip through the hills to and from St Mary. However, the road has been quieter than usual these days. This, Knibbs-Hall explained, is “caused by the highway construction and the recent pandemic, so we make less soup than before, but the weekends may require us to make more”.

The rest stop is lined with a host of places to eat and drink, but for some reason, the sounds of Capleton’s voice chanting, “Load up another cup” from DJ Khaled’s massive collaboration Where You Come From draws persons in the direction of Mama Bev’s. Of course, it could have been sheer coincidence as the music was not actually being played by the soup spot, but echoed from a car parked nearby, but after a sip of the red peas-peanut combo, there were calls for seconds. “That is a customer favourite and even more popular among the men because the peanut is said to boost them up,” said Knibbs-Hall.

“Load up another cup, load up another cup,” said one male truck driver as he departed his vehicle. “Mama Bev is the one cook on this stretch who I trust … it’s convenient, affordable, and tastes good. I can’t have a box food while I drive, but I can take my time sip until I reach my destination. It gives me the added energy I need to take on the day.”

So the next time you’re taking the Junction Road, add some excitement to the journey by making a pit stop in Friendship Gap for some red peas-peanut soup (with the cow skin). You won’t be disappointed. Instead, you’ll be begging for another cup.