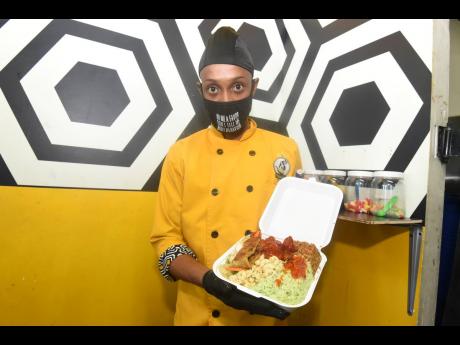 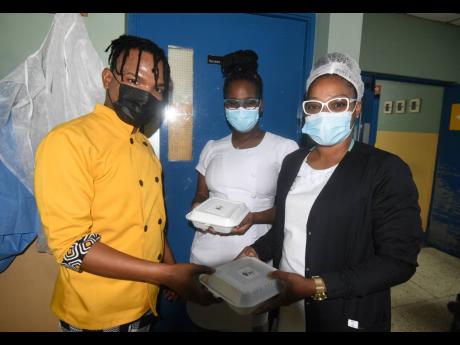 Kenyon Hemans
Andre Stephens, co-owner of Premier Kitchen, delivers food to nurses at the Kingston Public Hospital on Tuesday. He has committed to delivering 100 meals to frontline workers and homeless people for the next 21 days. 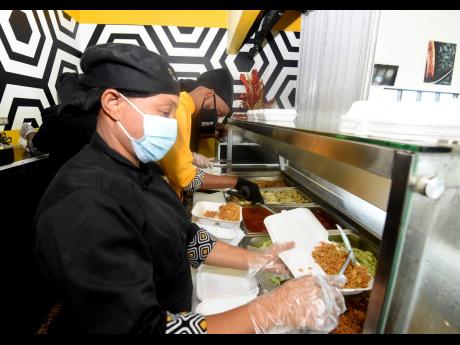 Kenyon Hemans
The staff at Premier Kitchen share the meals to be delivered to healthcare workers, law enforcement and homeless people.
1
2
3

The Lord said, “Feed my people”. That is how Andre Stephens started his Facebook post on Monday. And “as a servant of his Kingdom, we have empowered our staff to join with us to feed our frontline workers”.

The creative director was referring to his business partner, Odain Richards, and his staff at Premier Kitchen and Caterers, located inside the Digicel headquarters, downtown Kingston, and a planned initiative to feed the men and women who are at the forefront of the fight against the deadly COVID-19 virus.

The announcement was that Premier Kitchen was giving away 100 meals daily for 21 days to healthcare workers, law enforcers and homeless people, an initiative that began on Sunday at the Kingston Public Hospital (KPH).

Stephen said he got the inspiration on Friday, and that the instruction came from the Lord. Though he describes himself as a firm believer in Christ, he is, however, unaffiliated with any church. “Many churches believe I am too radical and unorthodox … I believe in the elements and the ancestors … I believe the Church is too relaxed, and have too many ceremonial ways,” he declared in an interview with The Gleaner.

It was after consultations with associates that Stephens decided to take on the challenge presented to him, bearing in mind the parable of the mustard seed. “As a true believer of Mighty Jehovah, we are reminded to have faith as a mustard seed,” he said. Whatever little resources they had would have to be multiplied. The food in the refrigerator that was to be sold this Wednesday, Thursday and Friday, the non-lockdown days, were made into meals for the first recipients. These recipients included frontline workers, Stephens said, who required nutritious food for their long hours on the job. He also shared that he was grateful for the treatment he received from medical personnel when he had some personal challenges in 2018.

A blessing for targets

The “prophet-in training” believes that you can achieve whatever the mind conceives, and that the 21-day outreach is a blessing for his targets, a motivation for others to chip in and maintain for as long as the pandemic continues. He philosophised that faith can move mountains, and faith has been keeping his business together despite the many challenges. It is a far cry from the frustration he and Richards experienced when they were trying to get money to set it up.

They have been a registered business since May 2019, but nobody was willing to finance them since they had no track record. There were tense and heated moments in their fight to get someone to buy into the plan. Someone eventually listened, the money was acquired, and the business set up.

Incidentally, they opened in March of last year, following the announcement that Jamaica had recorded its very first case of COVID-19. From the get-go, Premier Kitchen was tossed like a salad into the financial fire that resulted from the Government’s subsequent containment protocols and restrictions. They stayed in the kitchen, withstood the heat, and now they are feeding the ‘multitude’.

The story of Jesus feeding the multitude with five loaves of bread and two fish is one of the driving forces. “That parable resonates with me as a young man growing up in church. That is a miracle; my business is a miracle,” Stephen stated with much conviction.

While Premier Kitchen, in a video posted online, called upon corporate Jamaica and private individuals to partner with them, Stephens said they did not want money. It is all about turning up with the food and beverages, and they will prepare and deliver the meals. Pure National Ice has since come on board to supply ice for 21 days.

When The Gleaner visited Premier Kitchen yesterday, the team was busy preparing and packaging the meals, including cucumber basil rice, fire cracker chicken, calypso pasta, sautéed market vegetables, festival and fritters. Distribution stops were made at KPH, the Bustamante Hospital for Children, and Half-Way Tree, where there was a rush from the homeless and people working nearby. The police in west Kingston also benefited.

Yesterday, feedings took place at the Victoria Jubilee Hospital, the Accident and Emergency Unit at the University Hospital of the West Indies, the Kingston Central Police Station, and the homeless in Papine Square.