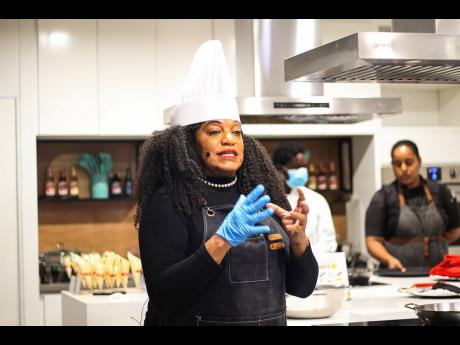 Stephanie Lyew
Award-winning chef and caterer Jacqui Tyson in the middle of her beer and food culinary pairings demonstration last week Thursday, on night one of Kingston City Beer Fest. 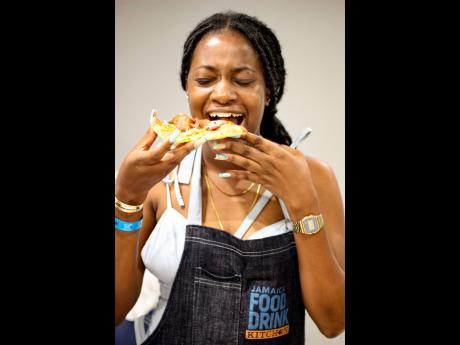 Stephanie Lyew
Shantay Pringle, the property manager of 10A Kingston was anxious to take a bite out of a slice of the pizza created by her team. 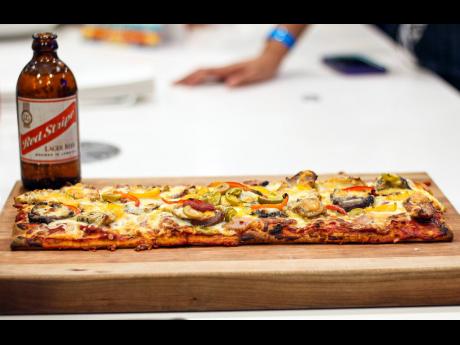 Stephanie Lyew
One of the teams participating in Thursday night’s culinary pairing session of the Kingston City Beer Fest certainly knew what they were doing as seen with this pizza creation cooked to perfection. 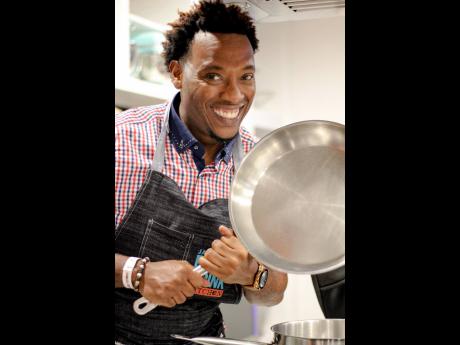 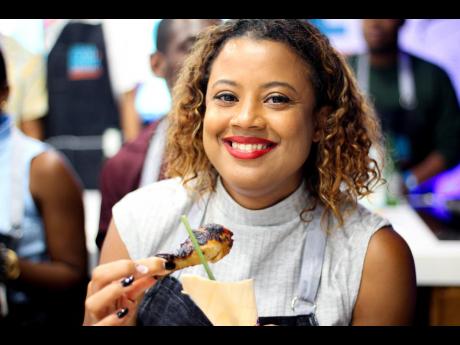 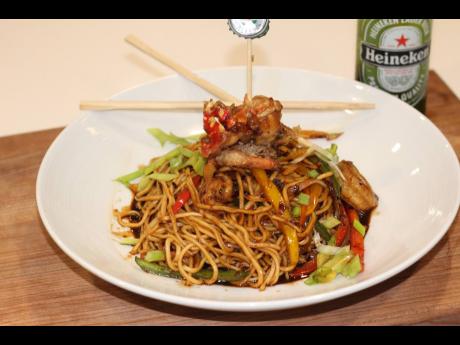 Stephanie Lyew
The Heineken Seafood Lo Mein was a hit among the participants of the culinary pairing session which was part of the Jamaica Food and Drink Kitchen’s inaugural staging of the Kingston City Beer Fest.
1
2
3
4
5
6

Jamaica is the land of wood and water…oh…and beer, which was a source of the inspiration behind the culinary pairing sessions held at the Jamaica Food and Drink Kitchen (JFDK) for its inaugural Kingston Beer Fest. When that culinary experience is curated by the award-winning caterer and chef Jacqui Tyson, the result is an inspired merger of creative expression and food culture.

In today’s culinary world, “innovation is the magic word” articulated Tyson, who played head cook and ‘bottle pourer’ for the session, where she guided a group of 20 participants through three recipes using Red Stripe Sorrel Beer, Heineken, and Red Stripe.

“People tend to cook a lot with wine; those same foods can be paired with beer. In Jamaica, we always see the pan chicken man flashing a bottle of Red Stripe beer on the meats, that’s because it complements the flavour from the jerk,” she told The Gleaner in an interview following the culinary pairing session.

Globally, wine is known as the universal beverage used in the kitchen for cooking owing to its acidity, but in any recipe that calls for red or white wine, beer usually offers a unique alternative, she said. One of the best places to start innovating was with a marinade or sauce from the barbecue sauce used on meats for grilling to plates of pasta.

“When pairing beer and food, it all comes down to matching the food’s flavours to the flavours of the beers. There are two main ways to approach the pairing; you can either contrast or complement,” Tyson explained.

She further explained that, like wine, the alcohol helps to transfer the flavours of meat into the sauce, as she demonstrated the preparation of chicken legs with Red Stripe Sorrel Beer which were cooked in an air fryer.

“There is no other innovative beer other than Red Stripe – the flavoured beers are a product of innovation. The flavours are light and are called fusion beers, (so) they can be used to marinate the meat or be put into a seasoning mix of your choice,” she said. “In all honesty, I’m not a beer drinker, but I discovered sorrel and like it; I like to use the original Red Stripe beer to marinate with it, especially when cooking jerk chicken and pork. And when people ask what wine to have with jerk, I always say there’s no wine that could compare to a cold Red Stripe with that dish. I love to cook with Heineken in my seafood dishes.”

Tyson prepared a Heineken Seafood Lo Mein dish of shrimp and lobster cooked with sesame oil, soy sauce and vegetables, which she dubbed the “apology meal”.

“Heineken is so good with seafood; I can’t stress it enough. The strong flavour cuts into it and lends itself like a food stadium; that contrasting ends up complementing the flavours. It is one of those beers that is also best for pairing with cheese. Easter is coming up, grab your bun and cheese and have a Heineken. Instead of wine again, it can be used with a cheese board, and the carbonation (in beer overall) is good for keeping the cheese together in an Alfredo; and you get the flavours underneath without it being overpowering. Beer makes it signature,” she shared.

Other dishes or recipes that can be paired with beers in the cooking process include steamed food and stews as well as jellies and glazes. Tyson left the third culinary creation – a pizza – as a challenge for the participants, who had to create a pizza from scratch using Red Stripe. From the cooking of the meats and vegetables for toppings to the tomato sauce, groups of four to five were asked to add their touch of innovation using the beer.

Nicola-Kaye Barnett, digital and fixed media manager at Restaurants of Jamaica Limited, said, “I enjoyed the entire experience of the beer and food-pairing event, especially the challenge. I also liked the chicken legs that were prepared, which were not only flavourful – I could taste the distinct sorrel flavour of the beer, and it was a good mix of savoury and sweet.”

Davida-Mae Chambers, project manager and content producer, said, “I thought Jacqui’s cooking session was interesting, because I am one of the persons who would never think to use beer as a base, I am used to wine. The recipes turned out good.”