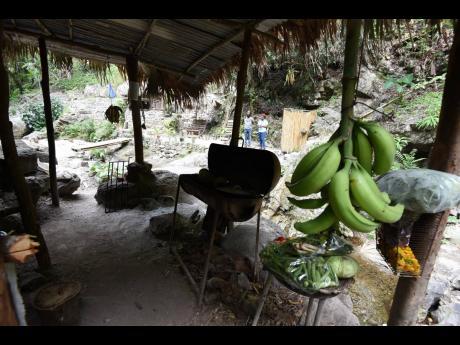 Ian Allen
The outdoor kitchen where delectable food is cooked at Pretty Close. 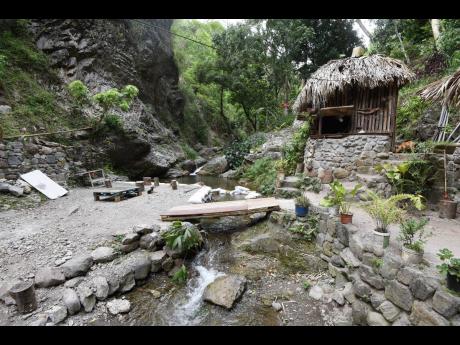 Ian Allen
Eat authentic Jamaican food at Pretty Close while the water from the Flora River washes over your feet. 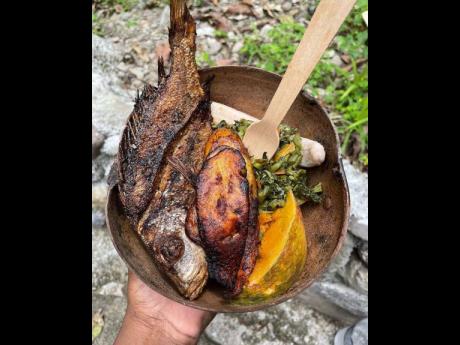 Contributed
It’s a rustic dining experience, with fish, plantain, callaloo and other provisions served in a calabash bowl at Pretty Close. 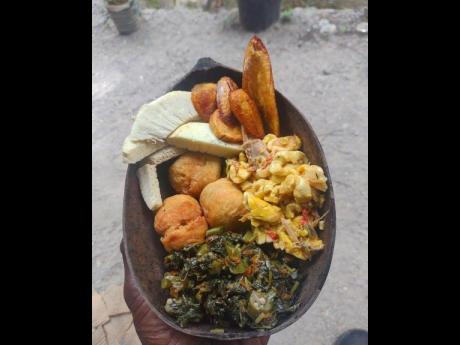 Contributed
Have an authentic Jamaican meal inclusive of ackee and saltfish, callaloo, plantain, breadfruit and fried dumplings at Pretty Close. 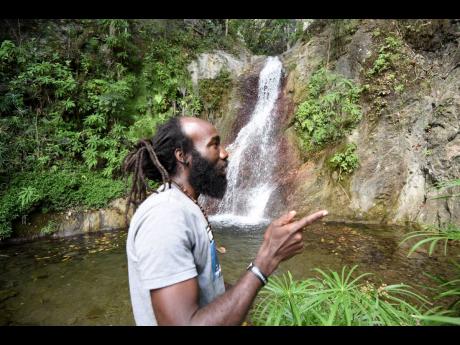 Ian Allen
Omar Edwards owner of Pretty Close explaining how the idea of the restaurant and attraction came about.
1
2
3
4
5

If you’re searching for a calm, family-friendly environment with traditional, delectable Jamaican cuisine, look no further than Pretty Close. Tucked away in the secluded Gordon Town community, with the additional incentive of cool water from the Flora River passing over your feet while dining, it’s worth a visit.

Omar ‘Ramo’ Edwards, owner of Pretty Close restaurant and attractions, operates the business sited on land that has been in his family for generations.

In 2019, he thought to remodel the location into a rustic outdoor restaurant which also offers visitors the opportunity to hike to the nearby waterfall.

“It was just a dream until me turn it inna reality right now. Start from this rustic river, where nothing was before, and just start build it up with just a vision ... to bring this to life,” he said, revealing that he began working towards his dream with only $10,000.

Years later, Edwards has been able to single-handedly curate the space in such a way that he can now accommodate up to 60 people at a time.

An ideal area for family get-togethers, friendly drink-ups, or an escape trip from the hustle and bustle of corporate life, Edwards is passionate about keeping the environment eco-friendly and as natural as possible. As such, he has utilised calabash bowls and cups to feed visitors, who can dig into their meals using bamboo utensils. “We need that back in Jamaica; too much pollution all over the place,” he said.

Occupying the space are hammocks for individuals who are interested in kicking back, while reading a novel, and enjoying the soothing sounds of the river below.

There are also a few huts which allow for group socialisations, with sight of Ramo’s outdoor kitchen, where meals can be requested and are prepared on the spot.“Everything Jamaican, except pork, of course” said the Rastafarian owner.

And if one were to venture to Pretty Close alone, Ramo’s five adopted mongrel dogs would serve as great company, as they are quite welcoming when visitors enter the premises. Their wagging tails demonstrate this. They may even lie on their backs in anticipation of a good ol’ belly scratch.

“Is like a therapy when you come to Pretty Close,” said Edwards, adding that river fish are known not to shy away from offering free pedicures to those soaking their feet in the river.

Edwards, who describes himself as a problem-solver for corporate Jamaica, noted that many people desire a place to relax that is not too far from the metropolis and is conveniently accessible, but still provides the same ambiance as if outside of Kingston. “People actually need da type a environment deh, because is you inna di office every day and dem just want some weh where dem feel free; so that’s Pretty Close,” he said.

Keeping the business within the family, Edwards, who has two boys age 13 and seven years old, expressed that his older son has shown promise in taking over the business in the years to come. So far, he has chipped in by guiding the travellers along the 10-minute hiking trail, where he earns his own money through tips.

Edwards anticipates building cabins in the near future and further expanding the area with other accommodations and attractions, so as to build his clientele.

Sunday brunches and dinners are also prepared and done to order, as are lunches during weekdays.

The area can also be rented for private events such as parties or for shooting music videos.

For those interested, reservations can be made. Opening times are from 9 a.m. to 6 p.m. Edwards can be found on Instagram @prettyclose876 or contacted via telephone at 876-845-6587.

“We’re not too far, it’s pretty close,” he encouraged.