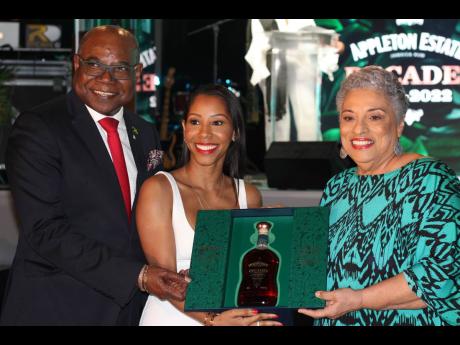 File
Minister of Tourism, Edmund Bartlett (left) and Appleton Estate Master Blender Dr Joy Spencer, proudly hand over the Appleton Estate Decades bottle number 1962, that was won by by Ka-el Geewax (centre), at a winning bid price of US$16,000. 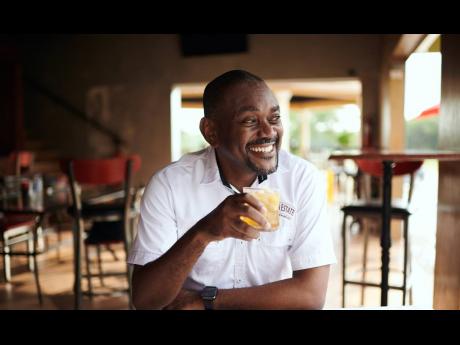 Appleton Estate Jamaica Rum is a spirit that has evolved over two centuries and most recently made history with the release of its limited-time offer of Appleton Estate Decades, crafted by Master Blender Dr Joy Spence as a celebration of Jamaica’s 60th anniversary of Independence.

Appleton Estate Decades is composed of the finest rums that have been hand-selected over the last six decades of Jamaica’s Independence, to create a luxurious and rare liquid blend to celebrate Jamaica’s history and heritage.

With only 1,962 bottles produced, bottle number 1,962 was auctioned and awarded to Ka-el Geewax at a winning bid price of US$16,000 at the recent launch.

Following this momentous occasion, Food sat down with Appleton Estate’s Senior Blender, David Morrison, for a look back to 1962 and the transformation of the golden-hued spirits over the last six decades.

How has the spirit industry’s attitude changed towards rum in the last 60 years? “Rum has arrived,” states Morrison enthusiastically. “Rum is now a serious player in the spirits industry.” And with the gold rum category having the highest growth potential of any category globally, which is a huge accomplishment for a spirit with humble roots emerging from the West Indies, we concur.

Throughout the years, rum has been a staple spirit of cocktail culture. From the refreshing mojito, made famous by American novelist Ernest Hemingway, to the Cuba libre (rum and Coke) created to toast Cuba’s freedom in the aftermath of the 1898 Spanish-American War, and the classic mai tai that is loosely translated as ‘the best’.

Rum cocktails have served as building blocks for bar menus around the world, but in the past few years rum has evolved. And the world is taking notice.

The year 2018 was dubbed ‘the year of rum’ by rum producers worldwide, as demand for the spirit grew to exponential heights in bars and taverns across the United Kingdom, Europe, and North America. Annual sales of rum topped £1b in the United Kingdom alone for that year.

In 2019, Appleton Estate became the first Jamaican spirits brand to officially achieve sales of over one million cases annually.

So, what changed in the rum game? “The premiumisation of the gold rum category,” offers David.

This is what incentivised rum purveyors to upgrade their packaging and liquid to compete with high-end spirits like Scotch, whiskey and brandy. Appleton Estate Rum comes with a minimum-age statement. Its ultra-premium range includes an eight-year-old, 12-year-old, 12-year-old, and 21-year-old.

“Premiumisation of rum has led to more people drinking rum, neat or on the rocks,” says Morrison. “People are appreciating rum for what it is now.”

This global demand for premium rum means big things for not only Appleton Estate, but Jamaican rum as a whole.

“What sets Jamaican rum apart from other rums is our rich history and authenticity,” explains Morrison. “Jamaican rum is known globally to be authentic rum. So much of our history shines through, and as consumers understand more about the authenticity of Jamaican rums, it will push our rum to the forefront of the gold rum category,” predicts Morrison. “People want quality, history, amazing experiences, flavour, and taste – Jamaican rum delivers all.”

Now that rum has undergone this premium transformation, what does it mean for the cocktail culture? Will rum be forced to crawl from the well up to the back bar, and assume the full glory that its minimum-age statement demands? Or can we continue to enjoy the daiquiris and party cocktails that have given birth to the best moments of our lives?

“A good drink is a good drink,” admits Morrison. “Classic cocktails will never go out of style. What you will see more[of] is rum replacing other spirits in classic mixes, the way rum has replaced bourbon in the Old-fashioned.”

As Brand Jamaica’s profile continues to rise globally, Appleton Estate Jamaica Rum is along for the ride. “The future looks bright,” confesses Morrison. “Once we establish our geographical indicators for Jamaica Rum – something we are doing to protect this critical resource for Jamaica – I believe the future will only grow brighter.”