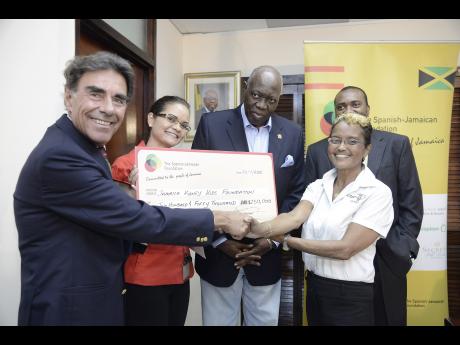 "With health being the most fundamental of human rights, we support the recently expressed vision of the minister of health, that Jamaicans and visitors should have access to first-class medical services," said Karen Donaldson, general manager, Spanish-Jamaican Foundation.

Dr Maolynne Miller, founder and chief executive officer, JKKF, was grateful for the donation. JKKF aims to raise CAD$144,000 to sponsor the studies of a Jamaican paediatrician to become a Paediatric Nephrologist, specialists in treating children with kidney ailments.

Jamaica has three such specialised doctors. however, they are based in the eastern part of Jamaica, forcing children on dialysis to travel across the island for treatment.

The donation brought the foundation closer to reaching the outstanding $6.2 million.

Minister of Health Dr. Fenton Ferguson commended the Spanish ambassador and SJF for their work in fostering and strengthening the relations between Spain and Jamaica.

He also noted that whereas the focus was on health, he could not deny its impact on the tourism sector.

The minister said its as the Cornwall Regional Hospital work towards establishing itself as a world-class health-service provider, health tourism will be on the rise, even more so with the introduction of another specialist.

Dr Ferguson also praised Dr Miller for her work with JKKF, emphasising that increasing the number of paediatric nephrologists was of grave importance.

The Spanish ambassador agreed with Dr Ferguson that relations between both countries were strong, stating that SJF would try to improve its support to the health sector.

Abascal lauded Dr Miller, noting that the kids are the future of the country, "The kidneys are one of the most delicate issues in medicine, and we are very glad that we can contribute to the betterment and enrichment of your foundation, to which we wish very great success in the future."