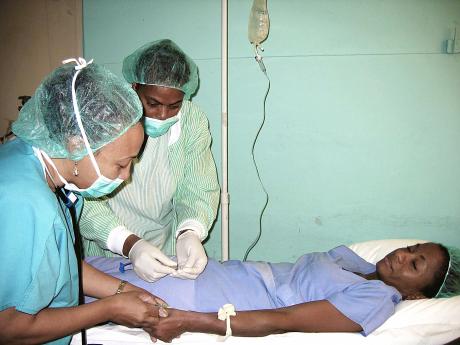 It kills more than eight million persons worldwide each year, but still sepsis, the potentially life-threatening complication of an infection, remains virtually unknown.

It is for this reason, among others, why doctors in the Department of Microbiology in the Faculty of Medical Sciences at the University of the West Indies, Mona, will host a one-day conference on Sunday, September 6, to discuss sepsis which reportedly claims more lives than any cancer.

The conference, which is being held in collaboration with World Sepsis Day Supporters, is themed 'Sepsis ... Why It Matters to You' and will be staged in the main medical lecture theatre in the Faculty of Medical Sciences.

Doctors involved in the symposium say the condition arises when the body's response to an infection damages its own tissues and organs.

According to Vickers, the condition is always triggered by an infection and can lead to shock, multiple organ failure, and death, especially if it is not recognised early and treated promptly.

Patients can become septic if they contract the E. coli bacteria, but viruses such as that which cause influenza, and parasites, which cause dengue fever and malaria, are also culprits.

Patients also become septic as a result of infections acquired both in the community and in hospitals and other health-care facilities. The majority of cases are caused by infections such as pneumonia, urinary tract infections, skin infections like cellulitis and infections in the abdomen (such as appendicitis).

"Sepsis is the leading cause of death from infection around the world, despite advances in modern medicine like vaccines, antibiotics, and acute care. Millions of people around the world die of sepsis every year," said Vickers.

Septic is said to affect all age groups and is not respectful of lifestyle choices. Vulnerable groups - such as newborns, small children and the elderly - are most at risk, as are those with chronic disease and weakened immune systems. Patients who become septic should be cared for in a hospital.

"Age, sex, and race or ethnic group can all influence the incidence of severe sepsis, which is higher in infants and elderly persons than in other age groups; higher in males than in females and higher in blacks than in whites," said the specialist.

"People with chronic illnesses, such as diabetes, cancer, AIDS, kidney or liver disease, are also at increased risk, as are pregnant women and those who have experienced severe burns or physical injury."