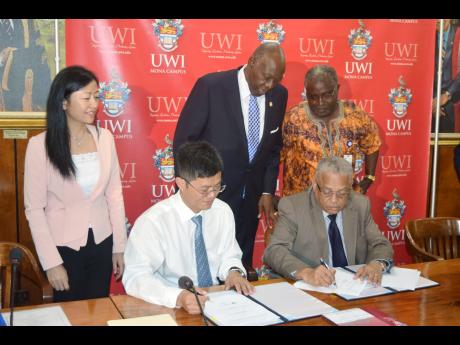 Last week, the University of the West Indies (UWI) and China Harbour Engineering Company (CHEC) signed a memorandum of understanding, which will see the start of negotiations for projects valued at between J$60 and J$70 billion.

This is the largest project undertaken by the UWI to date and it involves construction of a student centre, including an auditorium which will double as an indoor sports facility; a small hotel to replace the Mona Visitors' Lodge; the completion of the coal generation plant; and reconstruction of College Common for staff housing.

The deal also includes the reconstruction of the University Hospital of the West Indies, which will see an increase from 500 to 1,000 beds and modern facilities put in place.

Minister of Health Dr Fenton Ferguson lauded the agreement as a bold move that will transform the health and education landscape.

"The MOU represents one of the largest and most courageous attempts on the part of any educational institution in Jamaica and, more so, at a time when we are involved as a Government with the International Monetary Fund (IMF), which has resulted in the absence of fiscal space to do what we want to do," Dr Ferguson said.

"I am extremely pleased in relation to the expansion of the hospital into a modern First-World institution. It would be impossible to expand the offerings of the School of Medicine without creating space for medical interns, while ensuring that medical services are not compromised. I am happy that the university is taking this in the direction of becoming a part of the growth agenda."

This latest initiative means that the UWI would now be undertaking approximately J$100 billion in new projects since 2010 through public-private partnerships.