Down to One - Jamaica Moves Corporate Challenge takes 'Final Lap' 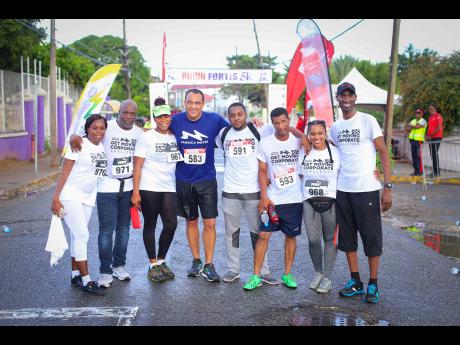 Minister of Health, Dr. Chris Tufton and the Restaurants of Jamaica (ROJ) Team at the FLOW/PUMA Fortis 5K Run held in September 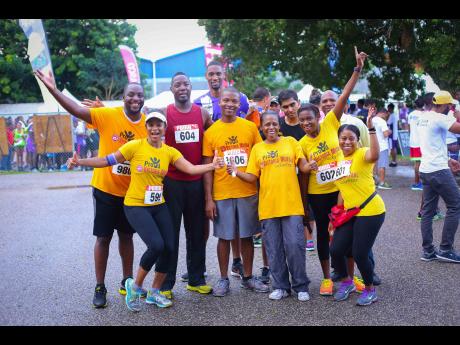 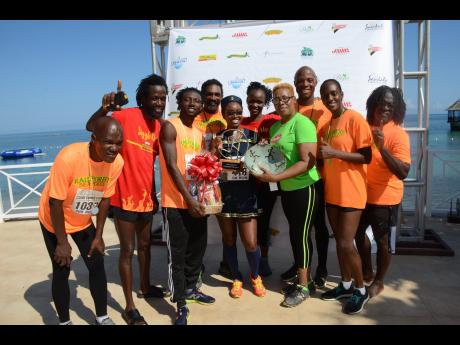 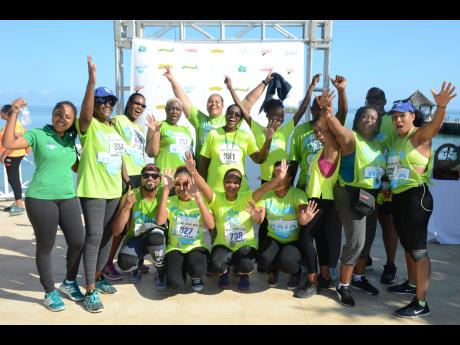 The Jamaica Moves Get Moving Corporate Challenge, which began with the FLOW-PUMA Fortis 5K Run, will culminate along Negril's famed seven-mile white-sand beach on Saturday with the Reggae Marathon, Half Marathon and 10K.

The challenge, which started in September, saw 16 private- and public-sector organisations entering a maximum of six 5K races over a four-month period. The organisations on the circuit are the Ministry of Health, Derrimon Trading, Island Grill, Sagicor, KFC, Lasco, Wisynco, Victoria Mutual Building Society (VMBS), Jamaica National Group, Advanced Integrated Systems (AIS), National Baking Company, Rainforest Seafoods, Paramount Trading, Stewart's Automotive Group, Jamaica Police Co-op Credit Union and National Health Fund . For four months, the challenge saw an increase in the number of participants from each company, camaraderie and an overall sense of dedication to the cause of becoming a healthier nation.

Minister of Health Dr Chris Tufton, who lauded the efforts of the companies currently in the circuit, said it's good business sense for employers to encourage their employees to pursue a healthy lifestyle.

"It makes employees happier people, more contented, provides them with the energy level to produce more and be more productive. It really impacts the bottom line of any entity if your overall company profile ,in terms of the health of your employees, is positive," he explained.

He added that this programme will benefit companies, as healthy employees are more productive.

"It reduces sick days. Therefore, little downtime of employees. It enhances their general well-being, not to mention it gives a good impression of management on employees because it's a demonstration of showing care beyond just the obvious profit motive. It shows care for the employee and their well-being," Tufton said.

The Jamaica Moves Get Moving Corporate Challenge has become increasingly important in light of a 2011 study by the World Bank titled Public Policy and the Challenge of Chronic Non Communicable Diseases, which estimated that an individual suffering from any non-communicable disease (NCD) spends approximately one-third of household per-capita expenditure on health- care services and the purchase of pharmaceutical drugs.

At the end of the challenge, companies and staff with the most points will be awarded. The awards include Company Spirit, Male and Female Champion. Organisation performance will be calculated based on the amount of points their members have accumulated.

Jamaica Moves is the government's coordinated national response to the increased incidences of NCDs. Through education, engagement and the building of supportive environments, the programme hopes to reduce NCDs by 25 per cent by the year 2025.