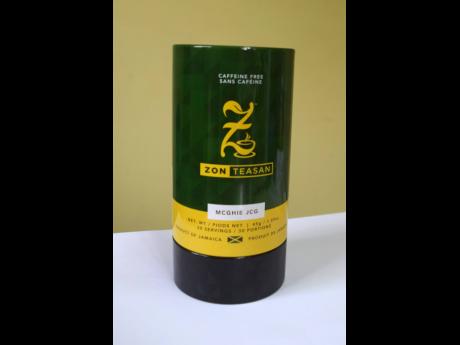 ZON Teasan, a nutraceutical made from extracts of the McGhie Jamaica Cinnamon Ginger

After returning from death’s door, which he attributes to taking formulation from extracts of the McGhie Jamaica Cinnamon Ginger (JCG), Edward Lawson is anxiously awaiting the availability of intravenous application of the formulation with the hope that he will be cured of multiple myeloma, a type of blood cancer.

After requests by Lawson to be included in a case study of the effect of the plant extracts on his condition, in-vitro (laboratory) testing showed that certain formulated extracts of McGhie JCG demonstrated anticancer activities against his cancerous cells.

“This was amazing news for me,” Lawson told the gathering at Northern Caribbean University’s (NCU) 20th Anniversary Charter Day Ceremony on June 24.

The occasion also marked the launch of Zon Teasan, Jamaica’s latest nutraceutical, which was made possible by initial research by NCU scientists on a ginger-like plant discovered on a St Catherine farm eight years ago. This early scientific work led to the plant being patented by Zon International Holdings as the McGhie JCG in the United States, Canada and 27 European countries.

Multiple myeloma, the disease afflicting Lawson, is a type of blood cancer characterized by the abnormal overgrowth of antibody producing cells (plasma cells). This usually is accompanied by low red cell blood counts and low hemoglobin levels and depending on the type, high levels of IgG antibodies.

As part of a case study, Lawson drank 16 ounces of the extract from the McGhie JCG three times daily. Before consumption of the extract, his haemoglobin level was 8.9 g/dL (normal range:13g/dL – 18 g/dL). By week two, it had improved to 11.3 g/dL, and by week six, it was within the normal range.

Before consumption, his IgG levels was 7,100 (normal range 800-1700). By week two, it was 4,100, and by week six, it was 3,300. It has since normalised. The strength of the extract used in the case study was much greater than what is normally contained in the nutraceutical.

“I have never received full remission from cancer, but drinking the plant extract has kept the disease in check so I can have a (good) quality of life,” Lawson remarked. “I am still fighting it, and I am still hoping and waiting for the intravenous mode of delivery of the plant extract by Zon and NCU.”

In this regard, Dr Robert Waters, researcher at the Arizona State University Biodesign Institute, has offered NCU his expertise in helping to establish a naturopathic treatment facility at the institution to provide intravenous delivery of extract formulations from McGhie JCG and other natural substances.

Speaking at the launch of Zon Teasan, Waters reported that more than 95 per cent of people with cervical dysplasia who were treated with natural substances recovered. In the case of liver fibrosis, he said that there was 88 per cent reversal without side effects and the use of drugs – only natural substances were used.

- It has 18 of the 20 naturally occurring amino acids that are organic compounds that combine to form protein.

- Has 20 times more protein than cranberry

- Moderate source of iron and sodium.

- Contains significant amount of vitamin A.

- May aid in the treatment of dysmenorrhea and diabetes.