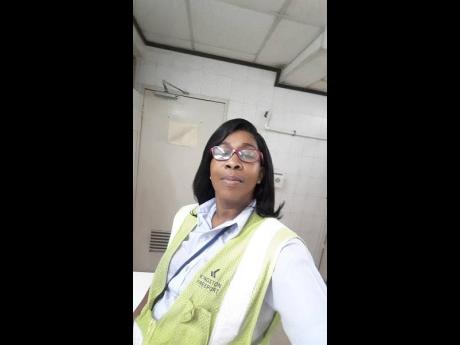 Many women find a Pap smear test to be uncomfortable or scary and try to avoid going to their gynaecologist because of it. But the few minutes of discomfort are ultimately worth the health benefits. Pap smears help to identify suspicious cells in your cervix that could signal a precancerous condition.

With April being observed as Cervical Cancer Awareness Month, the experience of Donna Marie Vernon, a crane operator at the Kingston Freeport Terminal, indicates why it is very important to get examined before it is too late.

A vivacious individual, Vernon, while working as a female machinist at a factory in Kingston, participated in a drive by the Jamaica Cancer Society (JCS) and had her Pap smear done. She recalled that all the other women, after completing the test, complained profusely about how difficult it was for them.

As one who does not back down from any challenge, facing her fears head on, Vernon completed the test and returned to her colleagues, pondering why they found the test to be so difficult. “I didn’t know why they were so afraid to do it. I did the test and literally laughed at the reasons they gave for being hesitant. I was told to wait one month for the results, and I continued doing my job as per usual. I actually forgot about it, until the results came back for the others,” Vernon said.

When the results were received by her place of employment, all the females received theirs except her. Vernon became quite concerned, and wanted to know why her results were left behind. “I was a bit upset because I was wondering why everyone else received theirs and I didn’t. I went to the nurse and she told me that I would receive it in the mail. That response did not go down well with me, but no matter how I questioned the situation, I did not receive a favourable response,” Vernon said.

Two weeks later, Vernon, while on her way home from work, received the much-anticipated mail. “When I opened it and read it, I felt my feet get heavy, and I could barely move. The results said I had cervical cancer. I was overcome with emotions, and the thoughts of leaving my children behind flashed across my mind. After I composed myself, I didn’t tell anyone,” she said.

For over a week after she received the results, Vernon, known to her community of St John’s Road as ‘Miss Green Boy’, was unable to eat or sleep. Having been advised to visit the JCS, after receiving the result, Vernon visited their offices with much anticipation. There she received much-needed counselling and advice that helped her to overcome the illness.

“The nurse said, ‘We have found it early, you are not going to die’, and this is what helped me through. I kept this one line at the forefront of my mind for the entire time and used every ounce of strength that I could to overcome,” Vernon said.

Still guarding her cervical cancer results to herself, Vernon, who is one of two women working as crane operators at the Kingston Freeport Terminal, underwent surgery.

“It was a non-evasive surgery. For the entire procedure, I cried quietly. I could literally smell the flesh burning, and I lay there praying and asking God to carry me through. The fact that I didn’t tell anyone weighed heavily on my mind, because if I had died that day, no one would have known at that time what I was going through,” she said.

Vernon is encouraging all women to have their Pap smears done yearly. “Trust me, if it wasn’t caught early I don’t know what would have happened. I have three children and the third one was born afterwards. Having a Pap smear done could save your life,” she said.