The dangers of cervical cancer: Get screened today 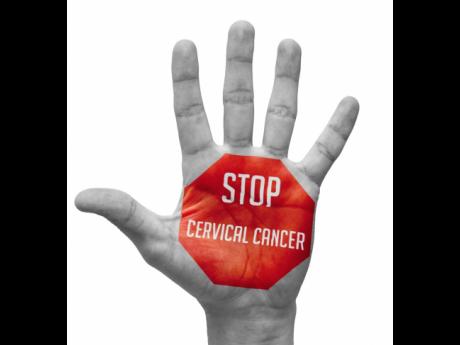 Cervical cancer is one of the deadliest forms of cancer affecting women, according to the World Health Organization (WHO). Some 528,000 women have been diagnosed, with 266,000 dying from this disease in 2012. It is the fourth leading cause of female cancer deaths and accounted for 7.5 per cent of all female cancer deaths worldwide.

In Jamaica, in 2012, it was the second leading cause of female cancer deaths and accounted for 13.2 per cent of deaths among women from cancer. Recent data also showed that the mortality rate for cervical cancer in Jamaica was the second highest among seven Caribbean countries.

Women with weakened immune systems or who are HIV-positive are encouraged to have annual checks.

Dr Christopher Daley, consultant obstetrician and gynaecologist at the University Hospital of The West Indies, said although cervical cancer screening, and in particular the Pap smear, is a means of preventing the disease, Jamaican women tend to shy away from this procedure.

With the number of risk factors for cervical cancer, including smoking, having multiple sexual partners, having a sexual partner with multiple partners or having or a weakened immune system, the Pap smear, and the human papillomavirus (HPV) test, he said, can identify precancerous changes, which, if left untreated, will progress to cervical cancer.

“Therefore, to guard against this disease, women should participate in these screening measures. The impact of risk in reducing cervical cancer is significantly less,” Daley said.

Cervical cancer is caused by the sexually transmitted virus HPV. There are over 100 types of HPV, and once an individual becomes sexually active, he or she is exposed to the virus.

“Although about 80 per cent of sexually active women will acquire the HPV virus in their lifetime, a significant amount of these infections will be transient as the virus is cleared by the normal immune system within the space of about six months to two years,” Daley said.

“It is those persistent infections that are at risk of developing into cervical cancer. During the pubertal years when the cervical cells are changing in response to increasing female hormones, there is particular increased vulnerability to infection after exposure to the HPV,” he added.

In the late 1990s, among women aged 15 to 49 years in eight countries in Latin America and the Caribbean, it was indicated that Jamaica had the lowest participation rate.

Data from the Ministry of Health and Wellness indicate that Pap smear screening at primary healthcare facilities had fluctuated over the last few years, increasing between 2005 and 2009 and declining between 2009 and 2010.

This pattern repeated itself as screening increased between 2010 and 2012 and then declined between 2012 and 2015. This may mean that fewer women participated in screening generally, or that some women moved away from testing at public to private facilities.

As there is no specific treatment for HPV, prevention is the key. The use of condoms and avoidance of the predisposing factors of cervical cancer are important.

“The use of the HPV vaccine is a most important factor in the fight towards decreasing cervical cancer. This aims at going a step ahead of detecting early changes on the cervix, by preventing the development of these changes,” he said.

Importantly, prior exposure to one type of HPV is not a deterrent to receiving the vaccine as one can benefit from coverage from the other types of the virus prevented by the vaccine. Additionally, the production of antibodies from prior exposure has been shown to be less than 50 per cent. The vaccine is recommended from age 12 to 55 years.

Daley was among a list of presenters at the Jamaica Cancer Society, in association with Baptist Health’s Miami Cancer Institute, Dr Joseph St Elmo Hall Memorial Lecture on Cervical Cancer, on Sunday.