Asthma: Is yours under control? 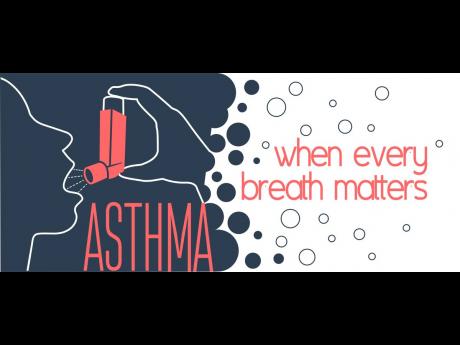 ASTHMA IS a chronic episodic disease which affects the airways. The hallmark of this disease is the bronco spasm – the narrowing of the airways – and the inflammation that takes place in response to triggers. Because of the lung’s sensitivity, the act of breathing in may cause a persistent cough, wheezing, shortness of breath, a tightening of the chest, and in more aggressive cases, a full on attack resulting in a combination of some or all the symptoms.

Asthma attacks may start suddenly or they may take a long time, even days, to develop. Some people with asthma will have a persistent cough (especially at night), and may be unable to do exercise or play like other people, or are not able to eat or drink cold food.

This is because the lungs are always reacting to things in the air. This makes the airways continually narrow and prevents the person from doing as much as they could. Many of these people have never had an asthma attack but they are still asthmatic.

Though commonly found in children, asthma affects adults too. One of the myths surrounding asthma is that you can outgrow it, but according to pulmonologist Dr Terry Baker, that is not the case. “We hear this all the time, that I used to have asthma, but I don’t any more, I must have outgrown it, but what we do recognise is that it has been controlled for many years.”

She continued: “Sometimes it’s these very same persons years down the road, they become exposed to some other triggers which then precipitate the symptoms.”

For most people with asthma, their triggers are unknown, but the most common are dust, weather changes, smoke, feathers, strong scents and even blossoming mango trees. It can be one or a combination, and no two people with asthma have the same triggers. Pinpointing your personal triggers is paramount to getting some kind of control on asthma.

A person’s susceptibility to attack is much greater when affected by a cold, the flu, rhinitis or sinusitis. When this happens, three changes take place in your lungs:

• The lining of the tubes that take air into the lung makes more mucus than normal. This mucus is very thick and sticky. It tends to clog up the tubes.

• Eventually, the lung may get so full of air that very little can go in and the body does not get enough oxygen.

In such a case of a full-blown asthma attack, a rescue inhaler is used, though other treatments are taken orally, and there are even injectables. Some may prefer natural therapies such as thyme and garlic, and other agents to help mitigate attacks, but doctors recommend controlling asthma with medication first before trying other therapies.

Outside of medication, preventive measures are best; environmental and personal changes can be made to help prevent attacks. Though some asthma sufferers have exercise-related triggers, exercise is still recommended, but under the strict advice of your doctors. Yoga is a great means of relaxation and breathing techniques. Movement will help improve your lung health; they will eventually get stronger, which may lead to fewer attacks.

If your triggers are exacerbated by allergens, then regularly cleaning your surroundings is key, and it is recommended that you wear a mask while doing so.

“Someone whose asthma is controlled is less likely to have a serve outcome as it pertains to COVID-19. If you’ve contracted COVID don’t stop taking the medication, monitor yourself and seek medical attention if symptoms worsen.

“What we are seeing is though COVID affects the lungs and we have concern for a person who has underlying lung issues, we have not had very may persons [with asthma] who have been severely affected or demised,” said Dr Baker.

There are many postulates behind that, as some doctors believe that the medications that persons use may help to provide some degree of protection against severe infection. It’s almost like the medications used to control the asthma help in the recovery because it acts as a sort of barrier.

“The diagnosis of asthma is not the end of the road,” Dr Baker stressed. “Persons should be empowered to get their asthma under control and maintain it because it isn’t going anywhere.”