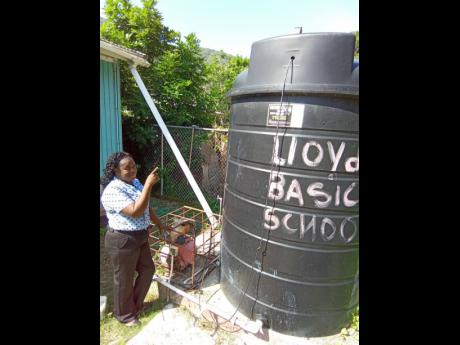 Contributed
Elesha Cuthbert, principal of Lloyds Basic School in St Thomas, points to the water tank on which the school relies to maintain sanitation of the school plant. A water pump on which the tank depended, stopped functioning and the institution has not been able to access another. With help from JN Money it is rehabilitating the concrete platform on which the tank will sit to support a gravity feed to supply the school. 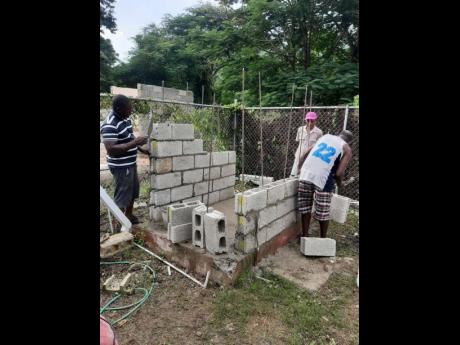 Contributed
Workmen diligently construct a new platform on which a water tank belonging to Lloyds Basic School in St Thomas will be placed to support gravity feed in order to supply the school with water. The institution recently received funds from JN Money to help with the project, following the malfunctioning of the school’s water pump some time ago.
1
2

ON A visit to Lloyds Basic School in the pastoral district some three miles from Yallahs, St Thomas, one will observe work happening in earnest, in preparation for the resumption of face-to-face- teaching and learning at the institution.

Except the work taking place isn’t a tidying up of classrooms in anticipation of an announcement, but the mixing of cement and erection of blocks and steel to accommodate something much more universal and basic that the school has been lacking for some time – water. The school recently received funds from the international remittance brand JN Money to rehabilitate a concrete structure that will facilitate a gravitational flow of the precious commodity to the school’s water tank, to ensure a consistent supply for the institution.

“We used to have a water pump but it had stopped working, and so we needed a gravity feed for the tank. It was agreed that getting a structure on which to place the tank would fix the issue. Most of the times we have water being pumped to the school only twice per week, but now that the concrete structure will be in place, we will have a constant flow of water,” an elated school principal, Elesha Cuthbert, noted.

The rehabilitated structure will not only mean the school will be able to maintain hygiene, but Cuthbert disclosed that without the structure, the school would not be able to meet the minimum standards to maintain its permit from the Public Health Department, and, consequently, its certification by the Early Childhood Commission.

Without piped water, she and her small staff of teachers, and even the students, were forced to use buckets to fill a water drum that would then be used to flush toilets at the 30-odd-year-old institution.

Sanya Wallace, senior manager for strategic planning and marketing at JN Money, said the support to Lloyds Basic School was the initiative chosen this year for the JN Money School Assist programme, which provides financial support to schools and students in need and forms a part of the company’s annual back-to-school campaign.

She noted that education is especially important to JN Money, because a significant percentage of remittances to Jamaica are intended to assist with schooling, especially in rural areas such as Lloyds District.

She explained that Lloyds was selected for assistance by the JN Group’s philanthropic arm, the JN Foundation, which conducted a needs assessment of the institution after receiving a letter from them earlier this year.

“And after speaking with the principal to further assess their needs, we were positive that the impact of this initiative would be far-reaching, as it would not only assist with maintaining good hygiene practices and providing basic amenities to sustain a healthy school environment safe from COVID-19 and other infections, but it would also keep the school in operation to provide more opportunities for the community’s children,” said Wallace.

With the school’s water woes almost now in the institution’s past, Cuthbert is looking forward to the announcement when schools, nationally, will reopen for face-to-face classes.

Lloyds’ student population declined to a mere 15 during the height of the pandemic, she informed, as, like all public schools across the country, the basic school had to close its doors and move its teachers and students to online teaching and learning. With some intervention by the school, the numbers have since grown to 28- half the size of the pre-COVID-19 population. But engaging students remains a challenge. Several children in the farming district are still without devices, and the community depends only on Wi-Fi signals, which makes engaging students in a virtual space very challenging.

“We go out to meet with and teach some of the students at least twice per week, because there are some students that we have not been able to reach at all, owing to the fact that they do not have gadgets, and some of the surrounding areas have no Internet connectivity or mobile data connection,” she explained, giving some insight into how the school has been coping.