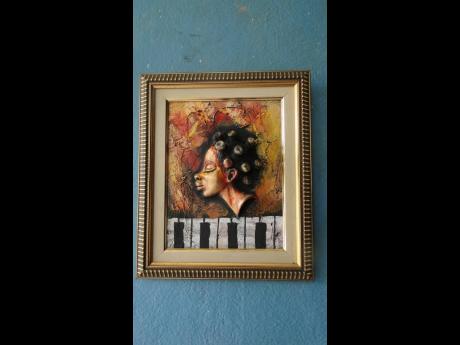 At age 14, Robert Campbell of Race Course, Clarendon, lost his mother. At a crossroads, he said, he was without any skills, and school was not an option. His days at Ensom City All-Age School in St Catherine were over, and his father was absent from his life.

Campbell’s entry into the world of work started with his learning to build furniture, and in the process acquiring woodcarving skills. It did not take long for him to become a proficient woodcarver, and so his initial earnings were from wood-carving.

He was also exposed to wood sculpting through the Mighty Gully Youth Project in Old Harbour, St Catherine. At Mighty Gully, he said, he fell in love with wood sculptures and has made some exquisite pieces himself. He still has his first piece.

While working at Wassi Art as a wood joiner, he went over the ­ceramics section, and there he made something out of clay. His “boss”, he explained, was ­impressed and suggested that he make the transition to the ceramic section, where he eventually got a part-time job before making the evolution to a full-time one. That was how he got seriously involved in ceramics, as he had always thought he would be an exceptional woodcarver.

The youngster who left school at grade nine, without any ­parental support, has evolved into a man who has made a name for ­himself in the creative industry in the Caribbean. He sculpts, carves, paints, creates moulds, among other things, and is also on the educational side of the creative ­industry. He teaches what he knows, and has undergone training himself.

At one point, he was contracted by the Caribbean Development Bank (CDB) as a consultant. Through this consultancy, he has taught mould-making and sculpting in Anguilla, Barbados, and Montserrat, where he initiated a pottery project. Campbell himself had done an advanced mould-­making course in Barbados, and in 2014 he was selected among the top 10 designers by the Caribbean Export Development Agency in Barbados.

In 2107, Campbell was among nine artisans (sponsored by the ACP-EU Development Minerals Programme, funded by the European Union, and implemented by the United Nations Development Programme) who ­received intensive training in ­ceramic techniques and pottery at the African Minerals and Geo Sciences Centre in Dar es Salaam, Tanzania. Since his return to Jamaica, he has taught ceramic ­production, imparting his knowledge to over 30 people.

This multifaceted artisan ­operates under his brand, Khadabra – Hands In Clay, and is hoping to secure sponsorship to attend the first World Artist Conference next month in Beijing, China. His work is very extensive and may be viewed at www.khadabra.com.