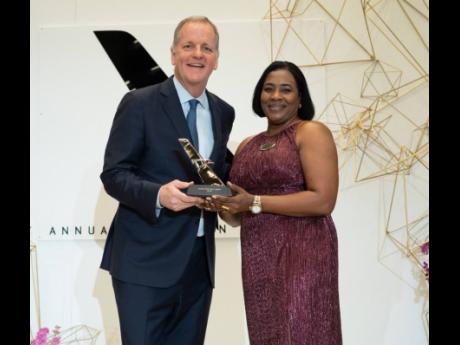 The Chairman’s Award is the highest honour and token of gratitude American bestows quarterly upon employees who have been nominated by their peers and managers for outstanding achievements that make a difference either at work or in life. The Annual Chairman’s Award is bestowed upon the top 100 quarterly winners selected by American’s officers.

Marvia Cole, lead agent for American based in Kingston, was among the top 100 annual winners recently honoured at the Perot Museum of Nature and Science in Dallas, Texas. The gala was hosted by CEO Doug Parker and top officers.

“The Chairman’s Award is meant to recognise those who are the cream of the crop – people who do amazing things on behalf of our customers, of each other, of American Airlines,” CEO Doug Parker said.

Cole’s career is marked by excellence in service. She volunteered several times to help guide operations at two stations in the Caribbean and is an expert in all airport functions. She has also spearheaded charity efforts and fundraisers to support cancer-fighting organisations.

“It’s an honour to represent Jamaica and bring home the Chairman’s Award,” said Cole. “Taking care of each other is part of American’s culture, and at the same time, it’s very rewarding to feel recognised and cherished as part of the team.”