EU figures down, as US, UK soar 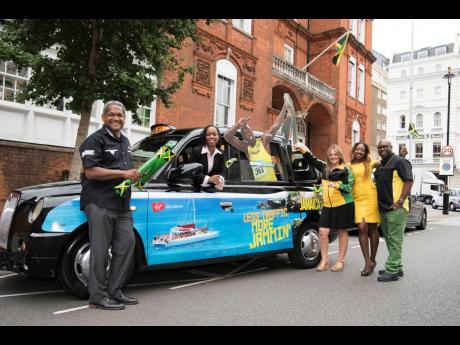 Contributed
Jamaica Tourist Board UK staff pose with one of the wrapped taxis.

Even as the number of tourists to Jamaica from the United States and the United Kingdom continues to surge, the number of visitors from the European Union was hit with a 54 per cent decline, trending downwards from 30,232 to 14,127

Minister of Tourism Edmund Bartlett attributes the decline to issues with airlift on the continent, which he said is of concern to him, so much so that he will be travelling there next month to consult with industry players.

“What has happened is that we’ve struggled with one or two flights, particularly, with Eurowing and some other flights that we have on a seasonal basis, so I am hoping to go into Europe in June and to go to France, in particular, to have some discussions with partners and airlines with regard to strengthening the airlift arrangements from that side of Europe, Continental Europe and Southern Europe,” Bartlett explained.

“People want to come to Jamaica. There is no question about that, but you also have to make sure there is the reliability of load factor because the airline is not going to fly unless there are somewhere in the region of 70 to 75 per cent load factor,” the Minister added.

Nevertheless, Bartlett said that the arrivals for this year remain on a strong growth trajectory, with robust figures coming out of the United States and the United Kingdom due in part to vigorous airlift from those regions, a result of relatively shorter flight times.

A total of 37,323 tourists travelled from the United Kingdom to the island-up from 31,653 in February, marking a 15 per cent increase in arrivals. Canada was Jamaica’s second-largest market, with 84,608 visitors arriving in February, but that country registered a six per cent decrease to 79,859 in April.

“There is a seasonal pattern for Europe. For that reason, they tend to come more in the winter, and they have many more options during summer than they have in winter. But the issue of airlift remains the strongest contributing factor to the level of growth that we are experiencing from places like the US, and so on,” he explained.

“You can appreciate why the US growth is so strong. We have over 1.2 million seats, I believe, for the summer, and of that, we have an additional 100,000 out of the US. So this summer, we have 8.4 per cent more seats than last year summer, and out of that increase, 100,000 of it is from the US alone, and you can understand why: they use smaller equipment, so they can make more flights,” Bartlett said.

With respect to efforts aimed at targeting the Chinese market, Bartlett said that Jamaica still has a long way to go as the distance is a factor.

“It requires bigger equipment to fly to Jamaica while in the US, we can use some of the smaller-sized equipment like the 727, and so on. For China, you have to use the ‘big boys’ – the Dreamliners and the 767s and the big Airbuses – and that requires large volume and capacity. China is only flying to one Caribbean island, and that is Cuba, and that is struggling,” he said.

In February this year, the total number of internationally arriving passengers to Jamaica was 404,478 while in April, it increased to 422,962, a five per cent increase when compared to that month. Bartlett remains upbeat that the overall numbers will continue to grow throughout the rest of the year.