Skip to main content
Around Ja with Paul H 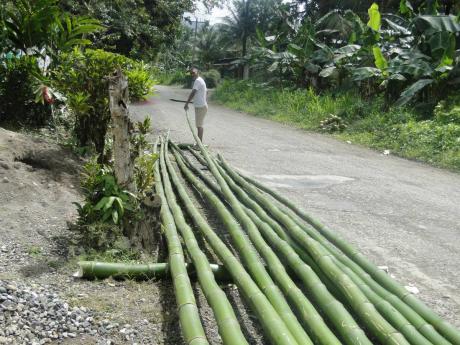 Recently, on my way to rafting down the Rio Grande in Portland, one of the things on my must-do list, I chanced upon an Indian man arranging some bamboo along the road at Grants Level, not far from the start of the journey down the river at Berrydale.

I could not resist stopping by to find out what he was doing. He turned out to be Norman ‘Supa’ Cataroo, a raft captain (raft operator) who was born and bred in the area. He was building his own raft.

Cataroo said that after he left school, his parents could not afford higher education for him, so he ended up propelling the rafts against the flow of the river from St Margaret’s Bay several miles back to the starting point at Berrydale. After doing that for five to six years, he became a licensed raft captain, and his number is 32.

It has been 20 years now for Cataroo in the rafting industry, and he is still going strong. Not only is he a skilled navigator, but his knowledge of raft building is spot on, and his only tool is a machete to measure and cut the bamboo with great precision.

Generally, each raft is made of 11 vertical bamboo, measuring 34 feet. After they are fastened together, their horizontal bases are affixed. The seat is firmly attached at one end. Balance is essential to the prevention of accidents. And as I travelled down the Rio Grande, I remembered Cataroo, and ­reflected on the importance of these captains in the tourist and the hospitality industries.

It really is a leisure job, if I may, smoothly sailing down the river, but there are challenges in the rafting sector. Cataroo and his colleagues are integral to the tourism experience in Portland, and I hope that somebody will do something to make them believe they are.