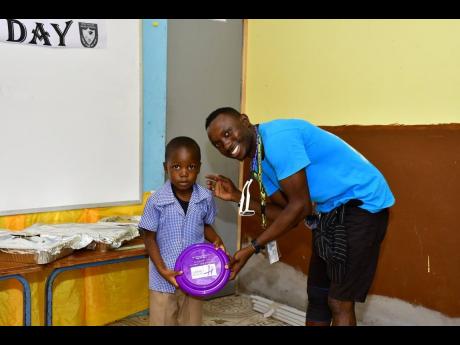 The event was staged in ­celebration of Child Month.

According to Holiday Inn Resort employee relations manager Marcia Black, as a family friendly hotel, their aim was to make children happy, and what better way to do so than in Child Month.

Black explained that the team comprised members from ­various departments.

“Our chefs went all out in providing a lovely, celebratory cake, hot dogs, chicken, and chips. Everything we knew the children would enjoy.”

It was a fun-filled morning, with games led by the entertainment team.

Assistant Entertainment Manager Davia Grant, who enjoyed the time spent with the children said, “We really love impacting the lives of children. It was fulfilling to know we came and they were just bursting with happiness.”

She was heartened by the ­expressions of kindness, stating, “We really like how involved the kids were despite not being used to the team. They were excited and really touched.”

Gooden-Smith said it was the first time that the school’s children had experienced such an interactive treat.

General Manager Clark Lobban said that the hotel would continue to make a difference: “We believe in investing in our children, who are our greatest asset”.