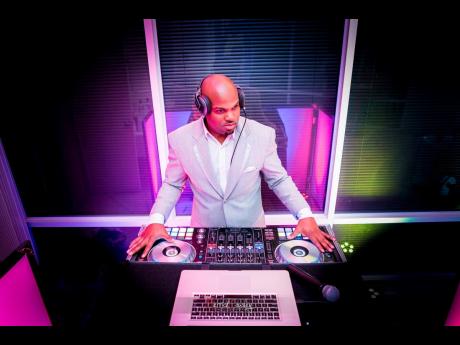 Contributed
Kevan Stewart at the controls.

Having a destination wedding a decade ago was usually seen as a major fête for some couples, especially if it is in a country that they’ve never been to before.

These days, the Internet has taken out a lot of the guesswork for brides, and couples in general, and destination weddings are becoming more and more popular. For one wedding purveyor, consistently creating a memorable experience for his clients is his only aim.

Kevan Stewart, Suits or DJ Vaun, as he is called in the hospitality and entertainment industry, is quickly becoming a household name. He earned the nickname Suits from the team at Sandals Resorts which ­describes him as a “consummate professional, knowledgeable about the business, and easily accessible”.

Taniff Turner, wedding manager, Sandals Royal Caribbean, came to know Stewart at a wedding over a decade ago where the guests would not stop raving about their DJ.

“I met him while working at Super Clubs. Kevan came in to do a wedding for one of our guests who had found him online, and he just blew us away. This was about 10 years ago, and I’ve used his services ever since, there [at Super Clubs], and now at Sandals,” she said.

“What stood out most for us then was that he was dressed in a suit, and to this day, he and all his DJs are always well dressed in suits. I think that really spoke to his level of service, very professional,” she also added.

Suits began his career in the industry first as a part-time disk jock playing at ­various events for his mother Patricia Berton, who taught him how to mix tracks. Berton was a bartender and disc jock at Cornwall Beach on the famed Hip Strip (now Jimmy Cliff Boulevard).

“I used to spend time with my mother in Montego Bay, and she would set up a sound system at the house where she would teach me how to play. I would also accompany her on a few gigs, where I saw how she handled the crowd, and from there, I found myself learning more and more, and eventually, she would have me play her dates when she left to go overseas to work,” Stewart admitted.

Stewart, who was born and raised in Manchester, soon found a love for music and the energy of the city and moved to Montego Bay to work full time at a call Centre in Freeport. There, he started to play gigs at night while he worked in the day.

Fast-forward 10 years later. Stewart is the managing director of jamaicaweddingdj.com and House of Flowers (HOF) Décor which is primarily marketed overseas to wedding planners and couples that are planning destination weddings. He is also the CEO of Reggae Tech, a full-service events and production company specialising in stage, lighting, and audio-visual productions.

“I started Reggae Tech as a way to earn additional income while employed at the call centre close to 10 years ago. While working at different events, I saw a need where we could offer more as it related to event production and execution,” he said.

From there, Stewart said, “one business idea became another”, and now, he leads three companies in western Jamaica that have a staff complement of 32 of which 15 are employed full time.