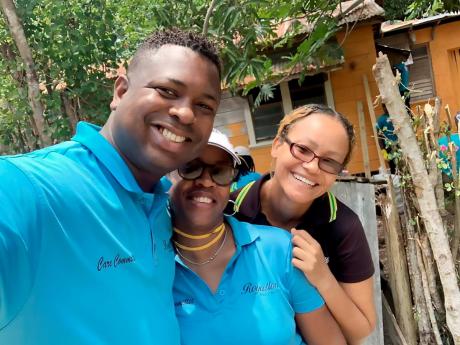 To say that you care and to do that which is caring are two different things, but on Labour Day, Royalton White Sands and Blue Waters walked the talk.

The company with its army of staff, ­executed not one, but two projects in the parish of Trelawny.

One of the projects was repairing the home of centurion Boris Anderson, a resident of the Martha Brae community. Anderson’s home had been in grave disrepair for several years, infested with mold, termites, and other harmful vermin.

Anderson, who after 100 years maintains his popularity in the parish, was assisted by several members of the community.

The brainchild of Debbie Bailey, senior staff in the quality department, she was able to convince the resort that this was among the most critical projects to embark on.

This was reinforced by the human resources director, Angeline Anderson, and the general manager, Daniel Cazarin, who wasted no time in agreeing that it was a worthwhile project to undertake.

On the day, scores of Royalton staff, with big hearts and strong arms ready to put their shoulders to the wheel, aided in the ­transformation of the home of Johnson, who was occupying a hazardous building.

The floor in sections of the house was ­falling in. The yard was heavily bushed and the roof needed repairs. The house now resembled an abode fit to be occupied.

It was a proud moment for all involved.

“We must applaud the Falmouth Police, led by Sergeant Wayne Wallace, who was instrumental to this project. They were not only present for moral support; they were entrenched in the hands-on work,” stated Royalton’s human resources director.

Contractors Philbric McFarlane and Raymond Stewart, as well as Dwight Facey, contributed to the project.

The community of Cooper’s Pen, where the resort is located, also received a facelift. Approximately 400 metres of roadway was cleaned and debushed. This project was spearheaded by Felecia Falconer and Michael Napier, quality manager, and ­environmental coordinator, respectively.