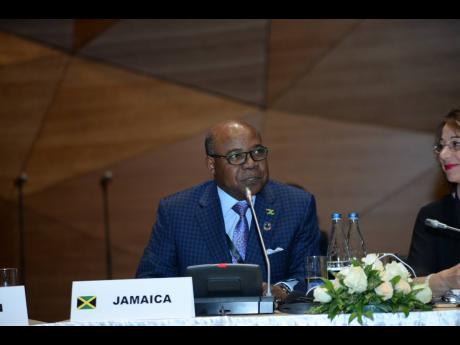 Contributed
Minister of Tourism, Edmund Bartlett at the 110th Executive Council Meeting of the UNWTO

Fired up by the United Nations World Tourism Organization’s ‘Global Force for Tourism Growth and Development’ theme during their 110th Executive Council in Baku, Azerbaijan, last Monday, Bartlett argued that for tourism to be truly sustainable, there must be greater equality.

His statements in a media release came on the heels of the recently released revenues receipts from international tourism totalling US$1.7 trillion in 2018 while indicating that one in 11 of the world’s jobs is generated by the industry.

“It begs the question of the distribution of this enormous wealth and the impact that it is having on the highly tourism-dependent regions of the Earth,” he posited.

With the Caribbean’s GDP dependent on the fortunes of the industry, while maintaining the highest level of tourism dependence, the tourism minister noted that this continues to be a real concern. He said that in addition to the GDP dependence of 40 per cent or more, and the US Virgin Islands with 98.5 per cent, the region was also characterised by high unemployment, a high debt-to-GDP ratio, social concerns, and high levels of income inequality.

He also pointed to statistics that indicate that 80 per cent of global tourism is owned by small- and medium-tourism enterprises yet less than 20 per cent of the returns go to them.

“This is hugely disturbing and creates asymmetry and imbalance, and that picture doesn’t look so good,” Bartlett stated.

He pointed out that tourism-focused discussions at the UNWTO Executive Council meeting provided “an opportunity for us to take a greater dive into understanding how this great industry of ours must impact the world in a more positive way by creating greater elements of equality, inclusiveness, and most of all, to build the capacity of tourism-dependent regions to not just recover and grow, but to thrive”.

Bartlett took the opportunity to welcome the announcement by the United States of America, which it is considering returning to the UNWTO. The announcement was made earlier in the day by Emma Doyle, assistant to US President Donald Trump and principal deputy chief of staff in the White House. “The return of the US can only help to make the Americas stronger as a tourist destination,” he noted.