Hanover Charities donates over $61m in grants and scholarships 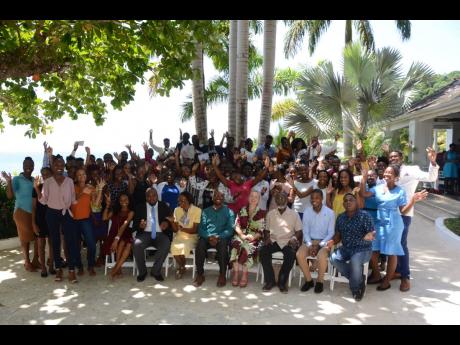 Contributed
Hanover Charities scholarship and other grant recipients pose for a photo following the awards presentations at the Round Hill hotel on Thursday.

More than $61 million in grants and scholarships were disbursed to students, schools, and community groups in Hanover at the Hanover Charities awards ceremony at the Round Hill hotel in the parish last Thursday.

The scholarship awardees ­included more than 90 new ­recipients, in addition to the previous 100-plus awardees from last year.

Chairman of the organisation Katrin Casserly said that aside from the scholarships, she was particularly proud of the now-completed Orchard Sports Complex and community centre in Hopewell, which also functions as a parent place and a homework centre for students.

Casserly said the charity would be undertaking the completion of computer laboratories at the Pell River, Askenish, St Simon, and Cove Primary schools in the parish as well as a joint project with the Green Island Primary School, which will receive a new multi-­purpose hall and classrooms. She said she was still pleased that the organisation was able to provide a substantial number of donations even as it becomes “increasingly difficult to raise funds”.

“We ensure to cover a ­crosssection of professions, and our scholars receive assistance in tertiary education in fields such as education, social work, medicine, law, psychology, agriculture, hotel and tourism, and more. It is our hope, and your duty, that you will serve your parish and one day will be able to give back,” she said.

Director of the University of the West Indies Western Jamaica Campus Dr Patrick Prendergast urged the students to engage in charitable activities in the parish, when they become able, as Hanover remains one of the island’s most poorly resourced parishes.

“Hanover has one of the smallest populations with just over 70,000. Trelawny has just over 75,000. Every parish around you is running two and three times the population of Hanover. But critically, it is not just about having small ­populations. It’s also a poorly resourced parish. And so, charities like this, led by such wonderfully awesome people, are so needed to keep hope alive, to keep dreams big, to keep the candle burning to keep, the future brighter than today,” Prendergast said.

Hanover Charities is the largest organisation of its kind in western Jamaica. It is a totally volunteer body, which was founded in 1957 and is registered in the United States as a 501C-3 organisation. It was founded by the late Custos of Hanover, Willie DeLisser, who brought together the shareholders of Round Hill and Tryall, who formed its first directors.

The mission of the organisation is to improve the health, ­welfare, and education of citizens of Hanover. Through its fundraising efforts, chiefly the Sugar Cane Ball, the organisation has, over the decades, financed school-feeding programmes as well as upgraded and constructed facilities such as clinics and schools. Hanover Charities also assists with funds to promising tertiary students who are unable to fully finance their tuition fees via the Morris-Watkins Scholarships.