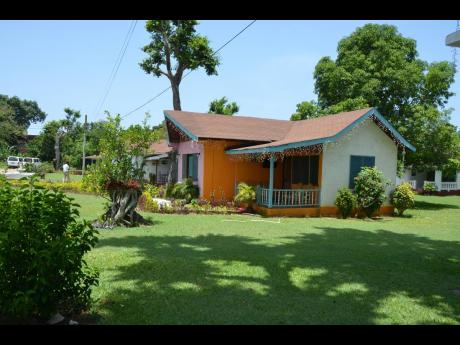 Claudia Gardner
LEFT: This cottage was painted and its gardens landscaped by students of the Summerset Hotel and Training School under the supervision of their lecturers.

A Gleaner article highlighting the woeful shortage of hospitality training in Negril triggered the establishment of a Western Hospitality Institute (WHI) campus in the resort town in 2016.

Today, the West End-based campus, dubbed Summerset Resort and Hotel Training School, is not only in full operation, but has the distinction of being the only hotel in Jamaica that is totally managed and operated by undergraduate hospitality students.

Operated by veteran hospitality expert Dr Cecil Cornwall, the campus was established to fill the labour gap, which ranged from a lack of supervisory and management personnel to the underpreparation of young people from Hanover and Westmoreland to fill vacancies in the industry.

Initially temporarily housed at the Negril Community Centre with approximately 100 Career Advancement Programme (CAP) food and beverage students, months later, Dr Cornwall secured a lease from the owners of the then defunct Devine Destiny, which now serves as classrooms and student dorms.

He also struck a management deal with the owners of the neighbouring Summerset Hotel in September 2018; completing the official establishment of what is now WHI’s westernmost campus. Enrolment is now at 400 full time and 45 part-time students.

“We wanted a hotel laboratory, just like your chemistry or your physics lab that students could practise in. We entered into an agreement to take over the whole facility and to make this the hotel lab for which the students and faculty could run the operation,” he explained.

“While we are developing the technical competencies, we had to develop the supervisory and management competencies of students so they could have the real experience of running it themselves, making and correcting their own mistakes so that when they go into the actual industry, they are ready,” he added.

Since its establishment, the campus has, among other things, guided 90 hotel workers to acquire American Hotel and Lodging international certification designation in collaboration with the Jamaica Centre for Tourism Innovation (JCTI) as well as the Centre of Occupational Studies in Restaurant Operations and Culinary Chef Management, which are also offered through the Ministry of Education.

The Summerset Hotel serves, too, as the practical training ground for students of all the WHI other ­campuses. Students are required to stay there between four and six weeks to participate in the running of the property.

Like its sister campuses in Montego Bay, Mandeville, and Kingston, the Negril campus offers associate degree ­programmes in areas including tourism ­management, food and beverage management, hotel management and culinary chef management as well as accredited short courses, which run from six to eight weeks, in waitering, bartending, and hospitality supervisory management. For Dr Cornwall, the progress made at the Negril campus has made him very satisfied.

“I am not where I want it yet … I am 80 per cent satisfied, and the other 20 per cent has to deal with the standard to which I want to take it. But if you are speaking of ­satisfaction in terms of the students preparedness for the industry, I would say a hundred per cent,” he said.

General manager of the campus Aladio Vassell, told Hospitality Jamaica that since the WHI took over operations at Summerset, the facility has maintained steady bookings due in part to the quality of service provided by the students and the inexpensive rate of US$80 per room, double occupancy, with three full meals per day and children under age 12 free.

The Summerset property ­comprises six newly remodelled rustic two-bedroom cottages, a duplex that is able to accommodate up to nine persons, and a two-storey log and thatch cabin. For these, Vassell says there are plans afoot to offer butler and spa services.

The air-conditioned conference room located at the back of the property accommodates 200 persons theatre-style and sits adjacent to the swimming pool, which is in the ­proximity of the dining room, bar, and a newly erected stage.

“What we have here is a ­simulator in the sense that the students will do the ­theoretical aspects of the course on the ­campus, and when they come here, we give them the ­practical ­aspect of it. It is a real-world ­situation, so they serve real guests. It’s not like they are serving persons that are made-up characters. These are persons who are checking into the hotel,” Vassell stressed.