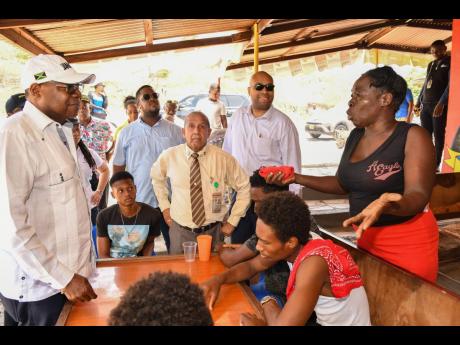 Tourism Minister Edmund Bartlett has announced that the parish of Clarendon will be a beneficiary of the tourism ministry’s reimagining exercise aimed at transforming areas of the parish into an ecologically friendly tourist hotspot for locals and international visitors alike.

Minister Bartlett made the comments following a tour last week of sections of the parish with Rudyard Spencer, member of parliament, South East Clarendon; His Worship Winston Maragh, Mayor of May Pen and chairman of the Clarendon Municipal Corporation and officials from the tourism ministry and its agencies to include the Tourism Enhancement Fund, the Tourism Product Development Company (TPDCO)and the Milk River Hotel and Spa.

“As part of efforts to build out new experiences by developing mini destinations, we have identified areas in Clarendon that are brimming with potential and are ready to be sustainably developed. Areas of note include the Salt River, the Salt River Mineral Spring, down into the stunning Jackson Bay beach and surrounding locales, which represent a real opportunity for tourism.”

Established in 1664, Clarendon is known for notable Jamaicans such as writer and poet Claude McKay and boxer Glen Johnson. The parish also boasts the historical Milk River Bath and Rio Minho.

Senior Adviser and Strategist, Delano Seiveright noted that the tour incorporated the Salt River area which is just under an hour away from Kingston utilising the tolled highway and the white sand Jackson Bay Beach further south, which stretches for over 350 metres (1,500 feet) with a width of ­approximately 12 metres (40 feet).

Bartlett also led a tour of the Milk River Mineral Spa, which recently benefitted from several upgrades, including a lift to facilitate disabled persons, a new lobby, expanded dining facilities, and a backup generator executed by TPDCO.

Under the instructions of Minister Bartlett, the technical team at the ministry, led by Permanent Secretary Jennifer Griffith, began an islandwide reimagining exercise to develop new tourist destinations and ­reorient some existing ones.

The areas include St Thomas, Lucea, and Negril.