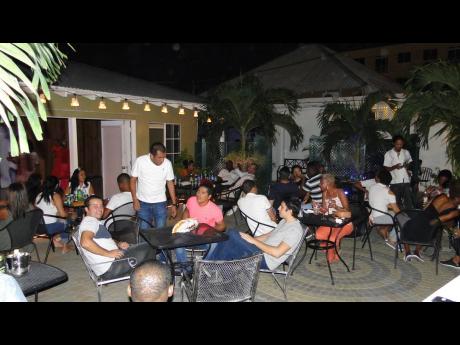 It was a warm Sunday evening when Hospitality Jamaica arrived on the cusp of twilight. Sizzling Latin music blared. A few people were at the bar. Someone was being served an original strawberry daiquiri. The scent of Cuban tobacco wafted through the air.

More people were seated around tables in an open space. On the tables were cans of Cerveza Cristal, a popular Cuban beer. Beside them were also well-known local brands, for the scene was not set in the heart of a Cuban city or a Cuban district in Miami. The Latin flavours and beats were kicking at 2A Strathairn Avenue in the heart of the Half-Way Tree area.

As darkness descended, the dance floor got busier. The music coming from the computers of Winston ‘Merritone’ Blake was arresting people’s feet at this monthly Latin Fusion Party, held by La Guantanamera Latin Food Shop and Cocktails, operated by Cuban resident in Jamaica Maria Romero.

And though Merritone himself was on spot, it was Reynaldo Diaz, for most of the evening, who made sure the authentic Latin beats were as hypnotic as hypnotic gets. The essence of the soirée, Romero said, is “to have an authentic Latin spot for the enjoyment of expatriates and Jamaicans in general”. The services are provided by native Cubans, yet in the name of the party, the food has more than a Jamaican touch. It is Cuban-Jamaican.

A few Jamaicans were seen soaking up the Latin culture, and as word gets around, more are expected to go see what this Sunday sizzler is all about. Gates are open from 2 p.m. until midnight. Admission is inclusive of food and drink.

The Merritone-La Guantanamera Latin connection has been up dancing away for about four months now, and plans are in the pipeline to serve Latin cocktails every evening.