AROUND JA WITH PAUL H 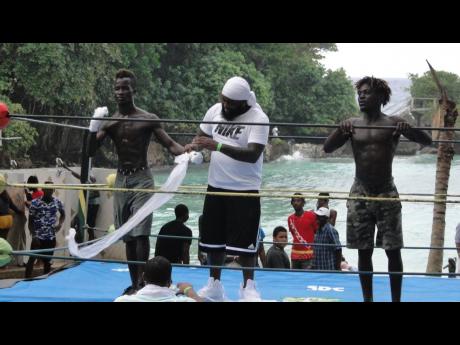 Paul Williams
And the winner is, at left, hometown boy, 'Head'!

I was enjoying the ambience at the recent Boston Jerk Festival, sipping on cane juice, munching on ‘salt fish flittas’ made by Syble Watson, who lives in the area, and watching the clowns making a fool of themselves, when I heard a man loudly advertising his jerked rabbit.

I shuddered. Who would really want to kill a fluffy, cuddly rabbit and jerk it for consumption?I thought about how they might have killed the rabbits, those poor innocent long-eared creatures, and I shuddered some more.

I was tempted to go see what it looked like, but as much as I tried, I could not. I see rabbits as pets, and you simply do not eat your pets. But, it was just mind-boggling as to why I was shaken by the thought of killing and jerking rabbits. It could have been something I saw years ago.

I witnessed how a hog was killed and I was tormented for an entire day thinking about how painful it could have been if someone had used a piece of lumber to clout me in the forehead. For that’s how the hog was killed. It had a sledgehammer effect on me. Bam! And the swine went silent after squealing incessantly for mercy.

Yet, back at the jerk festival my hypocrisy chipped in. I was hoping to get a piece of jerked white tail deer meat. These invasive ruminants I heard are teeming in eastern Portland. However, if deer meat was available, I did not see any, so that desire perished.

So, what’s the difference between killing an unwanted deer and slaughtering a rabbit? One is cute and cuddly, the other is a nuisance to farmers some would say. Which is more tender? Jerked rabbit or jerked deer? Is one more innocent than the other? And what about the fish in the flittas I was eating? The meat of the matter!

Jerked rabbit, jerked deer, and jerked fish aside, the turnout for this year’s installation must have been encouraging for the promoters. It was bumper to bumper, people to people, vehicle to vehicle. Things were warmed up the day before, music blared, firesides set up and ready to blaze, vendors marked out their spots, and people were seen washing pots. There were pre-event activities, even some boxing matches, and boxes of matches were standing by.

The size of the crowd on the day was a good sign that people were supporting events that were not put on by big corporate entities. The pull is the Boston jerk brand, and people had travelled from abroad to be at this jerked festival by the sea. For Boston is not just a little community in east Portland. It is well known the world over for its jerk foods.

The beach setting is perfect for the event, but the issue with parking and congestion has to been addressed. There was not adequate parking space and the road is very narrow. The situation inside the venue itself was “cook and curry”, but it was outside of the enclosure that greater control of pedestrian and vehicular traffic, parking, and vending was needed.

And should there be a future ban on jerked rabbit? I should have asked the clowns.