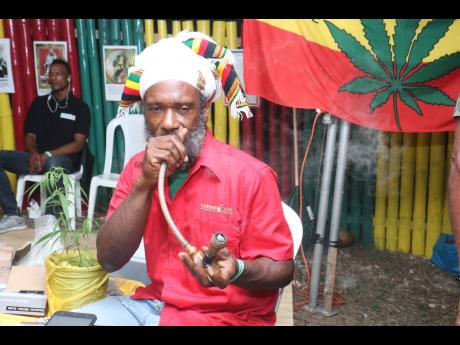 Jamaican ganja took its official place at Reggae Sumfest with Canna Corner, a designated area attracting thousands of visitors, both local and international, even the police, an indication that the demand for ganja-infused tourism experiences remains tremendous.

This is the second major Jamaican music festival to incorporate state-sanctioned ganja experiences into its offerings, the first being Rebel Salute, which established its Herb Curb three years ago.

Canna Corner was organised as a project of the Rastafari and Grassroots Ganja Association (RAGGA), a cluster of organisations whose aim is to, among other things, protect the ganja-related rights of Rastafari people and grassroots communities through educational and training programmes, collective representation for better industry standards and inclusiveness, as well as technical and administrative assistance.

For president and chairman of Cannacure and one of the founders of RAGGA, Eaton O. Evans, Canna Corner cemented the synergy between the festival, Jamaican ganja and reggae music, which has its groundings in the Rastafarian faith.

“It was good; it was superb. It was actually more than we were expecting. The patrons of Sumfest were pleased with what they saw. It’s something I would say differentiated Sumfest this year. Because this type of vibe is always present inside of the reggae festivals or shows. But, in this organised fashion and my people coming together, it was marvelous,” Evans told Hospitality Jamaica on Saturday night at the Catherine Hall in Montego Bay.

“Canna Corner is important because a symbiotic relationship is being forged between herb and the music. Most Jamaican reggae artistes, they push the ganja on a different level, calling for the freeing of the herb. So, collaboration on something like this was needed, and, if you see how Reggae Sumfest is being advertised, it has a Rastaman doing musical vibrations as its logo. So it is a coming home; us meeting at home, basically,” he said.

The response from the tourists and Jamaicans, Evans said, was heartening, adding that with its medicinal cannabis offerings, Canna Corner also provided a boost to the Jamaican wellness agenda through its vegan food offerings and natural beauty products; and ganja tourism, which still remains largely untapped.

“It was also a great experience for the overseas visitors. Some of these people were already exposed to those types of displays, because they are from California, Colorado, different places in Canada, and these places are big cannabis dealers. But for some of them it is the first they are seeing stuff like this. When we showed the cannabis plants, they wanted to take pictures. It is the first time many were seeing an actual cannabis plant,” he added.

“Some of them said they wished they could just stay in Jamaica, because this (ganja) is what they want,” he said.

According to an article published in The New York Times earlier this month, titled ‘Cannabis tourism is on the rise’, ganja experiences are “totally hot in Colorado and emerging in others like California, which have “rolled out the green carpet for tourists and entrepreneurs are organising marijuana-infused experiences, including painting classes, bus tours and food classes”. Ganja tourism is regarded as a multibillion-dollar industry.

The RAGGA organization obtained a special exemption from the Government under the Sacramental Rights and so members of the organisation were not able to sell ganja in the village, but were only able to accept monetary contributions.

Ras Negus of Rastafari Root House sees the Canna Corner as redemption for the weed and a furtherance of the push towards full legalisation.

“We give thanks, because we are on a mission with ganja to get Rastafari full freedom and full rights in all operations of the ganja business. We give thanks that this has happened right here in Montego Bay,” he said.

Lorinel ‘Ras Picky-Picky’ Simmonds told Hospitality Jamaica that he was grateful that ganja was being embraced in the very city where one of its natives, Mario Deane, was arrested and later lost his life due to possession of a ganja spliff.

“I want to say thanks to Mr Bogdanovich for allowing us this privilege so we could be here at Sumfest. We do appreciate it and we are looking forward for it to be better. Regretfully, a youth, Mario Deane, lost his life over what we are here trying to promote today,” he said.