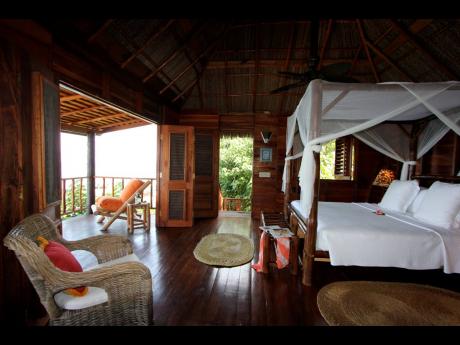 Contributed
A bedroom at the TenSing Pen in Negril

Readers of one of the world’s leading travel magazines, the influential Travel + Leisure (T+L) magazine in its 2019 World’s Best Awards, have ranked Jamaica’s Tensing Pen and Round Hill Hotel and Villas among the top 100 hotels in the world.

Tensing Pen, located in Negril, is ranked 76th in the world’s top 100 hotels and fifth in the Caribbean’s top 25 hotels. In both categories, Tensing Pen is the highest-ranked Jamaican hotel.

Montego Bay’s Round Hill Hotel and Villas is the only other Jamaican resort to make the mark this year.

“Last year, we were ecstatic to be voted as one of top 25 hotels in the Caribbean category. Now, in 2019, to be further recognised as one of the world’s top 100 hotels is truly wonderful. All of the Tensing Pen team is elated by this recognition from the readers of Travel and Leisure. It truly demonstrates the appeal of small and independent hotels to world travellers and the commitment of our hard-working team to service excellence,” remarked Evelyn Smith, general manager.

For his part, managing director of the Round Hill Josef Forstmayr has been toasting the coveted position in which his resort has found itself.

Renowned for its impeccable service, outstanding food, and the willingness of staff members to go the extra mile to meet requests, Round Hill has earned an international stamp of approval over the years, that is, in addition to the fact that physically, as it has often been described, as a naturally beautiful, serene, tranquil, mesmerising, quaint, and fabulous place.