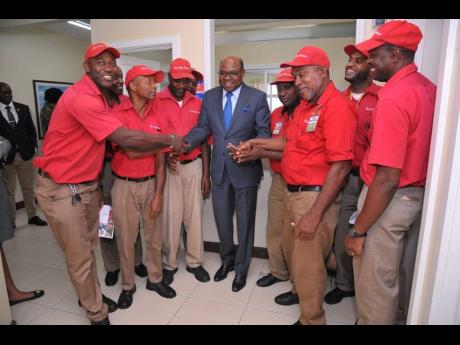 Tourism Minister Edmund Bartlett says the Tourism Workers’ Pension Scheme will be a landmark plan for tourism social legislation in the world, as it will be the first of its kind to provide a comprehensive pension plan for all the workers of the tourism sector – whether permanent, contract or self-employed.

Speaking at a Tourism Workers’ Pension Scheme Awareness and Sensitisation Seminar at the Norman Manley International Airport in Kingston recently, the minister noted that “we now, as a result of collective efforts over a period of time, have come together with a plan that will be a landmark plan for tourism social legislation in the world. Jamaica will be the only country in the world that has a comprehensive pension plan for all the workers of the tourism sector”.

The Tourism Workers’ Pension Scheme is designed to cover all workers between age 18-59 years in the tourism sector, whether permanent, contract or self-employed. This includes hotel workers as well as persons employed in related industries, such as craft vendors, tour operators, red cap porters, contract-carriage operators and workers at attractions.

The Tourism Workers’ Pension Scheme, which will receive $1 billion in funding from the Tourism Enhancement Fund (TEF), will see benefits being payable at age 65 years or older.

“This landmark piece of social legislation in the industry is going to represent, in time, the largest pool of domestic savings that this economy would have provided. Real growth comes when we are able to convert domestic savings into investments,” he said.

He further noted that the plan will be of particular interest to workers in the industry who have been employed at a number of organisations over the years on short-term employment contracts.

“The plan will protect contract workers by providing them with a social safety net. It will enable them to join as a self-employed person. So you can move from one company to the other, change your contract, knowing that your retirement plans are secure,” said Minister Bartlett.

According to the tourism minister, the scheme is the final piece in a four-point human capital development plan to enhance Jamaica’s tourism workers.

The other three initiatives in the human capital development plan are training, capacity building, and creating the ability of tourism workers to have knowledge and convert that knowledge into practical applications; providing a pathway to professionalism and jobs; and improving the social conditions around which the tourism worker lives.

The Tourism Workers’ Pension Scheme Bill was passed in the Houses of Parliament on June 25 and is in keeping with the Government’s focus on creating a social security network within the tourism sector.

The Ministry of Tourism will host three other Tourism Workers’ Pension Scheme Awareness and Sensitization Seminars in Ocho Rios, Montego Bay and Negril as part of its public awareness campaign.