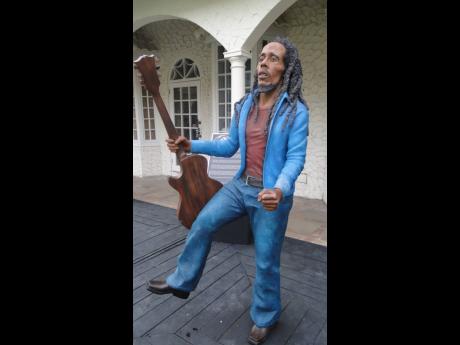 Paul Williams
This Scheed Cole rendition of reggae legend Bob Markey is made of recycled materials.

Jamaica is a land where many heroes and legends were born and bred, and in homage to them many monuments, some in the form of statues, were erected.

From Morant Bay in the east to Montego Bay in the west, these structures are telling part of the story of who we are, and where we, (out of many, one people) are coming from. The Montego Bay Legends Circle is one of the places to go see some of these statues.

Situated on the lawns of St James Place Shopping Plaza, located along Jimmy Cliff Boulevard, part of the friendly city’s Hip Strip, these statues are somewhat different from others elsewhere. They are made of the recycled material produced by Scheed Cole, CEO of 360 Recycle Manufacturing.

There, are the life-like impressions of national heroes Samuel Sharpe and Marcus Garvey, National Heroine Nanny of the Maroons, and music legends Bob Marley and Jimmy Cliff. In addition to those statues, there is a monument in honour of the Reggae Girlz and a statue of track and field legend Usain Bolt made of screws and bolts, and metal plates.

Apart from the heroes and legends, there are two crocodiles and two lions made of the 360 recycled materials. The project is the brainchild of Christopher Issa, chief executive officer (CEO) of S Hotel. The Montego Bay hotel is located beside the plaza, and the Legends Circle is situated in front of the shops on the plaza owned by the property.

Apart from the monuments, the S Hotel has been showcasing Jamaican art in its varied forms. There are many pieces in its lobby whose walls are mainly covered by “simulated keystones” made of cement, and it is currently curating an exhibition titled ‘Heart and Soul’, depicting “different walks of Jamaican life” on the walls of all the corridors.

Some of the fixtures and furniture in the lobby were made by Tamara Harding from a guango tree that was felled on a property, across the road from the hotel, that is being upgraded to situate a conference centre. There is also a print of Michael ‘art warrior’ Thompson’s work in all of the rooms.

“As a Jamaican hotel company, we wanted to showcase the best of Jamaica and the things that we think make us different, one of them is our culture … If we know the ways we can make it tangible, we are gonna use it more as we sell Jamaica … It is our culture which comes from many years and many different influences,” Issa said.

The concept for the circle came when S Hotel, which holds the franchise of Usain Bolt’s Tracks and Records, located in the plaza, acquired the metal statue of Bolt done by German sculptor Diedel Kloever in 2012. Kloever, who is married to a Jamaican woman from St Mary, was influenced by the Olympian’s exploits at the 2008 Olympics and the 2009 World Athletics Championships.

The tribute to the Reggae Girlz was expected to be mounted in a ‘Jamaica Pavilion’ during the 2019 Women World Cup in France. That pavilion did not materialise and S Hotel acquired the piece.

When the idea of putting more pieces in the space was conceived, a representation of Bob Marley also popped up. The chain got permission from Marley’s family with the promise that it represents Marley’s real-life height. To get it right, they contacted Cole whom they knew of from a project in Negril and an article in The Gleaner.

National Hero Marcus Garvey and National Heroine Nanny of the Maroons followed Marley. Jimmy Cliff, a son of St James, also gave permission for his likeness to be mounted. When National Hero Sam Sharpe was suggested to join the pantheon, that he was already mounted in Sam Sharpe Square was the response.

The fact that the statues in the circle were different from the ones in Sam Sharpe Square was another retort, and S Hotel acquiesced. It turned out that Sharpe’s likeness is Issa’s favourite because “it brings Sam Sharpe to life”, while he said that of Garvey is the “best rendition” he had ever seen of Jamaica’s first national hero.

Through the Montego Bay Legends Circle, it is the intention of Issa “to inspire and to spread the word about our culture and the Jamaicans that went before us,” he said.