Luxury quarantine - Stranded tourists whiling the time away in Negril 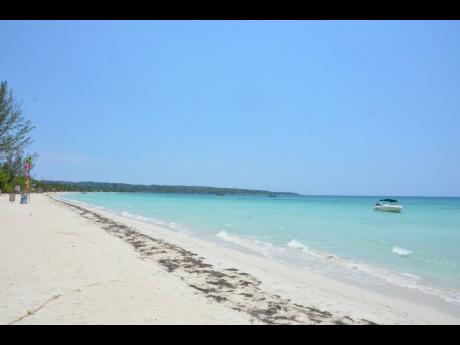 Janet Silvera
The legendary Negril beach is now deserted as far as the eye can see.

A handful of tourists stranded in Negril, after mass flight cancellations and closure of the island’s borders because of the COVID-19 pandemic, say they prefer whiling the time away in the Capital of Casual, instead of risking infection en route home.

Unbothered by what is happening in the rest of the world, Bernd Flammang, a German national and multiple repeat guest to Jamaica, says Negril is the perfect place to be stranded. The Spain-based real estate agent, who has been staying at Charela Inn, said he arrived in Jamaica on February 1, and initially decided to extend his monthlong stay to the end of April, but is now making arrangements to stay until summer.

“I come to Jamaica every year. When the coronavirus came up in Europe, I decided to stay longer here. So I made a new flight ­booking for April 29, but a few days ago the flights operators told me that they cancelled. But I am not bothered, because I am fine in sweet Jamaica. In Europe the situation is really, really worse, so thanks to God that I stayed here at the right time,” the Hamburg native told Hospitality Jamaica.

The company operating the flight told him they would give him an alternative date for May, but he is no hurry, he says, “because I feel much safer right here. I will try to get myself a visa to stay three more months, because I don’t want to be infected on the way back”.

Questioning what he would do in Europe, with all the restaurants are closed, Flammang is not enamoured by frozen food, which he said would be his only option.

Flammang said he has not been lonely, as the few guests and hoteliers remaining in the resort town have established relationships and are keeping each other company from a distance.

“There’s nobody on the beach, so I feel like I am in luxury quarantine, as the seven-mile beach looks like a private beach right now. I use the time to reflect on my life, because in normal life you are always thinking about the future and all the problems, and right now you are reflecting on yourself, what’s important in life, to stay healthy and never lose your positive vibrations; never lose your optimism,” he said.

Lauding the Jamaican Government for being proactive, Flammang said having closed the borders early was commendable. “They (Government) also put the people in controlled quarantine, so I think they handled it well. In other countries like Europe they waited too long, and right now it’s exploding,” he added.

Over at The Aqueducts of Negril, Chris and Helena Millar, a couple of from Swansea in the United Kingdom, said they, too, opted to extend their stay to July and have already made contact with the Passport, Immigration and Citizenship Agency (PICA) to finalise arrangements.

The Millars arrived in Jamaica in January for a three-month stay, with plans to attend the Bob Marley 75th anniversary celebrations and carnival in Cuba. The Cuban trip was cancelled as there was no guarantee there would be a flight back to Jamaica afterwards.

“We took the decision with our daughter and our son, and they said we are probably better off staying here because of the situation which had evolved in the UK at the time,” Mr Millar explained.

Their decision to stay was bolstered by the long trip they would have had to make to return to the UK. “Journey from Negril to Kingston; spend time in the airport in Kingston with hundreds of people trying to get out on flights; nine to 10 hours inside an aircraft, breathing air from all the people on-board, then again in the arrival area at Gatwick Airport that would have been full of people coming from not just Jamaica, but all over, and then we would have a four-hour journey to get back to South Wales,” he added.

Another Jamaica-born couple, Stanley Cummings, a 75-year-old who has been living in Sweden for the last 45 years, and his wife Carina Linder told Hospitality Jamaica that they, too, have been staying at Charela Inn since January 14. They were scheduled to leave the island last week Tuesday but their flight was cancelled.

“I am very relaxed, because my roots are here. I like it here and this is my country. Virgin Atlantic will let us know when we will be able to travel. I think the Government here has done the right thing. I am all right here,” he stressed. “I hope this will open the eyes of Jamaica and the world that we need to take care of the environment.”

Cummings noted that his decision to extend his stay in Jamaica to the summer was due to the heightened risk of infection on what would be an almost 24-hour trip back to Swansea.

“The trip, first from Sangster to Gatwick, a nine-hour flight, then transit four hours, then to Copenhagen one and a half hours, and then we go across the bridge on a train with more people again, so the risk of infection would have been very great,” he said.