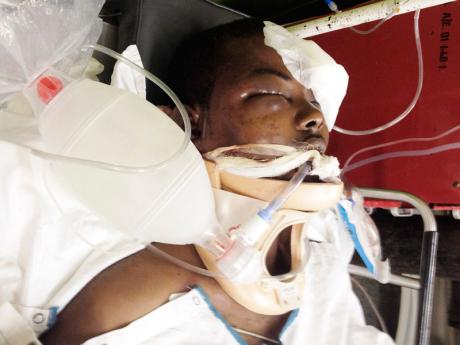 Mario Deane, of Rosemount, in Montego Bay, while he battled for his life at the Cornwall Regional Hospital.-Contributed 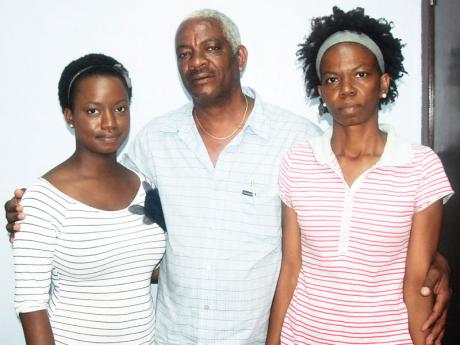 Man succumbs to injuries received at a MoBay police station

Mario Deane of Rosemount in Montego Bay was unconscious for three days, battling for his life at the Cornwall Regional Hospital after suffering from serious head injuries he received at the Barnett Street Police Station in Montego Bay just hours after he was arrested for a ganja spliff on Sunday morning.

Up to the time of his death, he never regained consciousness.

"He had a terrible chop over his left eye, one on the top of his head, mark on his left arm, bruise under his chin. Face was swollen, eyes swollen that you couldn't see his eyelash. His head has grown twice the size it was before he was beaten," said Frazer.

The Gleaner spoke to Deane's

distraught family, while he remained unconscious after the vicious beating.

"When they (the police) took him to the hospital, they told the doctors that he had fallen off a bunk bed while they told us that he was beaten by cellmates," said Frazer. According to her, shortly after 10:30 a.m. on Sunday, she got a call from her son that the police had arrested him for a ganja spliff and that he was at the Barnett Street Police Station. He also asked his mother to tell a friend to go down and bail him.

Shortly after midday, Deane's friend, Castel McKenzie, went to the Barnett Street Police Station with the required documents, inclusive of a bail form signed by a justice of the peace, to bail him.

"When I went there, he was taken out of the cell and was being processed to be released," said McKenzie. "While we were talking, he said he did not like the police, and the woman police, who was dealing with the documents, said she did not like what he said and handed me back the bail papers, saying she was going to keep him locked up for an extra two hours so I should come back at 5 p.m."

McKenzie said instead of waiting until 5 p.m., he went back at 3 p.m. When he got there, he was told that Deane had been taken to the Cornwall Regional Hospital. Knowing he had left his friend in perfectly good health just over two hours earlier, McKenzie said he was perplexed and began asking what had happened to him.

"They (the police) told me that he was beaten up by other prisoners," said McKenzie. "However, when I went to the hospital and saw him, it was clear that his injuries did not come from punches ... . I don't buy that story at all."

Nicholas Deane, the dead man's father, said to The Gleaner on Tuesday: "I don't want to stand by and watch my son die for a mere ganja spliff ... . I doubt that a spliff would attract more than $100 fine in the court."

Yesterday, his mother cried openly for her only son. She said that she would fight for justice for her son.

"He was in the care of the Government," she said, calling on Jamaicans all over the world to help her in this case.

"I need help - internally and externally. I need help in finding a good lawyer to provide justice for my son, and if the help comes from as far as the diaspora, I would appreciate it."

When Sergeant Peter Salkey, the liaison officer for the police's Constabulary Communications Unit in St James, was contacted for a comment before Deane's death, he said the matter was under investigation.

"We are aware of the incident and there is an ongoing investigation by both the CIB and INDECOM," Salkey told The Gleaner. "We can't provide any additional information at this time."