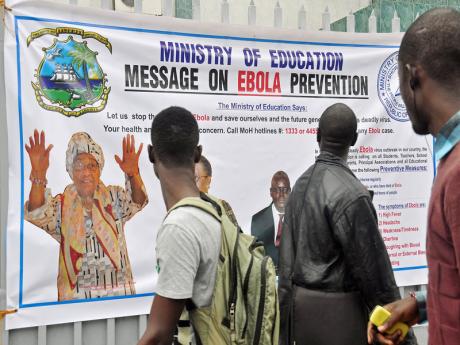 The image of Liberia President Ellen Johnson Sirleaf (left) appears on a banner warning people about the Ebola virus in the city of Monrovia, Liberia, on Friday. Over the decades, Ebola cases have been confirmed in 10 African countries, including Congo where the disease was first reported in 1976. But until this year, Ebola had never come to West Africa. - AP photo 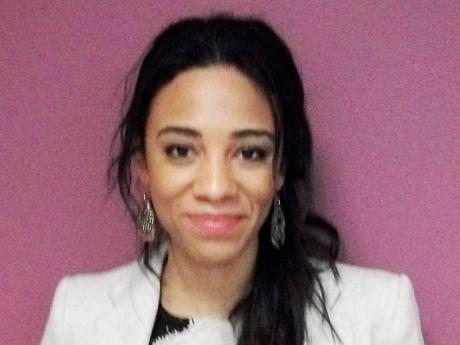 A gutsy Jamaican doctor living in the United Kingdom, who has added her expertise to the gamut of international medical teams combating the Ebola crisis in West Africa, has given the island high marks for taking the necessary precautionary measures to stave off a local outbreak of the disease.

Dr Louisa Baxter, who spent her early years in St Mary and once worked at the Kingston Public Hospital, told The Sunday Gleaner yesterday that vigilance must remain the order of the day to avoid a Caribbean outbreak of Ebola, which has already claimed at least 961 lives from 1,779 recorded cases on the African continent - a death rate of just more than 50 per cent.

"It is a worrying issue for the international community," stressed Baxter, who had just returned to London, England, from Sierra Leone and Liberia, where she came face to face with the suffering of Ebola victims.

"Jamaica is doing what it is supposed to, but the gravity of the situation (in Africa) must not be lost on anyone because the international community is so closely connected these days."

Last Thursday, Jamaica's Health Minister Dr Fenton Ferguson indicated that the ministry has been keeping itself informed of developments with respect to the Ebola outbreak through reports issued by the World Health Organisation.

According to Ferguson, surveillance at the nation's points of entry is already in place and "we will be continuing with training and sensitisation of our health workers, as part of measures to increase our vigilance and preparedness for this disease".

He added: "I would like to assure that we continue to enjoy the support of the University of the West Indies Virology Lab, the United States Centres for Disease and Control and Prevention and the Caribbean Public Health Agency, for testing if needed."

Baxter, while stressing that she did not believe in unnecessarily quarantining travellers thought to be at risk for carrying the disease, pointed out that, with nations as interconnected as they are, an infected individual could travel across the globe in 24 hours while appearing healthy during a 21-day incubation period.

She was, however, emphatic in pointing out that the virus is not easily transmitted unless the patient is already very sick, with symptoms such as vomiting and bleeding, and that it is persons who are caring for infected individuals who are most susceptible.

That fact has been borne out in data which has indicated that many of the infected have been family members who care for the sick, as well as medical personnel, including two Americans who were flown back to the US for treatment. Several high-profile fatalities have been doctors who were infected while treating victims.

Baxter's aversion to quarantine stems primarily from the stigmatising effect of such actions.

"There is also the issue of people's human rights to be considered," she said, noting that that matter is a technical issue which ought to be properly debated at another level.

She stressed that there are basic precautions to undertake to prevent infection, including washing of hands and maintaining one's hygiene.

Baxter holds a Jamaican passport and describes herself as an active Jamaican who last visited the island in April. She is from a family of doctors, including her father and brother, a neurosurgeon. She also has another brother who is in medical school.

After her birth in the United Kingdom, Baxter's parents returned to Jamaica where she spent much of her young life in St Mary's capital, Port Maria, and enjoyed her early education in St Ann. To this day, her elderly father, who travels back and forth between the United Kingdom and Jamaica, is still called 'Doc' back home in St Mary.

Baxter told The Sunday Gleaner that she will be back on the front line in West Africa in another a few weeks to continue the battle against Ebola with her medical allies.

Stressing the gravity of the situation in West Africa and the need for the international community to move with dispatch, she noted that the disease will not be easily contained.

"I can't say when the situation will ease, but it will require the joint effort of the international community," she said.

1. The World Health Organisation's declaration that the Ebola outbreak is a global public-health emergency is unprecedented.

2. Everyone is at risk, including Jamaicans, as the virus can travel easily around the world.

4. Be alert to symptoms in travellers who can have no symptoms for up to 21 days but have the virus - particularly if they travelled from West Africa.

5. Health care providers have been dying in large numbers as they often don't have the right equipment to help protect themselves.

6. Protecting against pandemics like this is every government's business, it needs their citizens to be aware to keep themselves and their families safe.

7. There is a great deal of stigma around Ebola, which means that patients often don't want to seek treatment and contributes to people running away from health care and dying.

8. Restriction on travel to those who show symptoms or have been in contact is life-saving, but we have to be careful not to quarantine people who are not at risk unnecessarily, as this is not effective and only adds to panic.

9. Poor countries are adversely affected as they don't have the health structures in place to protect themselves.