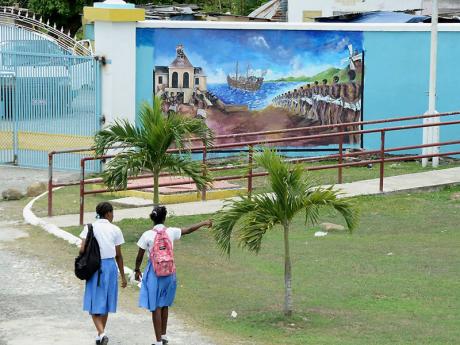 A section of Seaforth High School in St Thomas. The institution will be a part of the ministry's pilot project aimed at improving performance.- File

FOLLOWING THE findings of the 2014 National Education Inspectorate (NEI) report, which revealed that the majority of primary and secondary schools inspected were failing, Minister of Education Ronald Thwaites has revealed a number of corrective measures, several to be implemented for the new school year.

Speaking on Wednesday at the Alhambra Inn in St Andrew, Thwaites said the recent report - conducted between September 2013 and March 2014, inspecting 129 schools (115 at the primary level and 14 secondary) - showed that 61 per cent were ineffective, while 39 per cent were effective.

This report has brought the accumulated number of schools inspected to 803 since 2010, across the six administrative regions of the Ministry of Education. This represents 84 per cent of all primary and secondary schools. Of the 803 schools so far assessed, 45 per cent, or 361, have been found to be effective, and 55 per cent, or 442, ineffective.

More primary schools were deemed unsatisfactory than secondary schools, with the majority of students not attaining even the minimum academic standards, the report stated.

Among the recommendations Thwaites outlined was the pooling of resources under school district arrangements to lift struggling schools. The pilot project will begin September in St Thomas with Robert Lightbourne, Seaforth and Paul Bogle high schools.

"What we have resolved to do as a start with these schools is to see if we can move the schools closer together under a single administrative organisation," said Thwaites.

Additionally, five unnamed schools in Region Two, where weaknesses are pronounced, are receiving targeted support in leadership teaching and learning strategies, and targeted support is being given to 96 schools with marginal or low performance in the Caribbean Secondary Education Certificate (CSEC) mathematics and English examinations.

Noting that more than 40 per cent of mathematics teachers in the primary schools never took the subject in CSEC, Thwaites said literacy and numeracy coaches will be deployed to assist approximately 400 struggling schools. There will also be leadership training for 128 principals whose performances were considered unsatisfactory.

Declaring that extra lesson has become a billion-dollar business, as well as over $20 billion being spent on remedial education each year, Thwaites said drastic measures are needed to put corrective measures in place from within the traditional-school system.

Thwaites said teams from the ministry will work with the schools to adapt the national curriculum to meet the learning needs of the students as well as incorporating more community resources so that students can relate more closely with the social and economic activities in their local communities.

Other recommendations include consideration for formal extension of the school day on a phased basis in the schools where it is deemed necessary.

"Education should be the country's number-one priority. Nothing else is going to work if we do not have a well-educated population, and not just academically, but socially adjusted and spiritually conscious persons," said the education minister.

"The National Education Inspectorate report seeks to build a culture of accountability for the first time in the Jamaican education system. This report turns the spotlight on the quality of education in our country's primary and secondary schools and continues to provide timely and relevant data, which can positively impact school improvement and policy-making efforts," concluded Thwaites.

The full NEI report will be made publicly available once it has been tabled in Parliament next month.

• 57 per cent satisfactory and above

• 43 per cent unsatisfactory and below

• 55 per cent satisfactory and above

• 45 per cent unsatisfactory and below

• 63 per cent satisfactory and above

• 37 per cent unsatisfactory and below

• 58 per cent and 51 per cent satisfactory and above in English and mathematics, respectively.

• 42 per cent and 49 per cent unsatisfactory and below in English and mathematics, respectively.