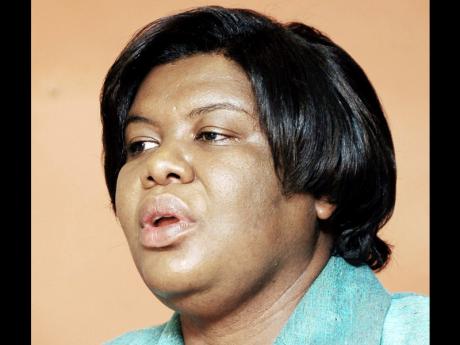 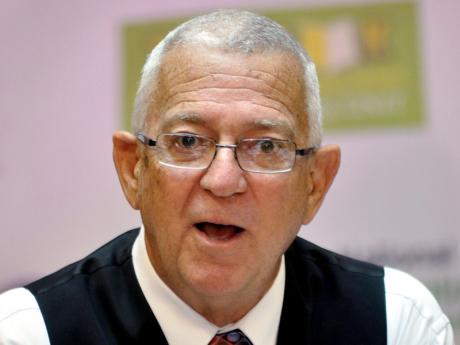 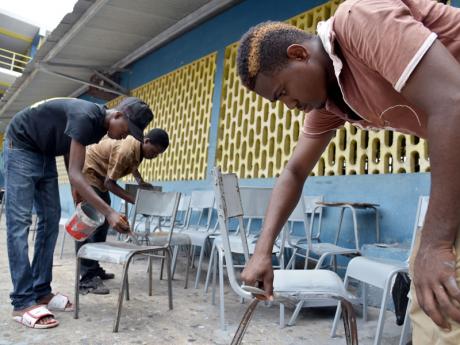 Brandon Hayles (right), Ackeem Fray (left) and Ryan Anderson put a coat of paint on chairs at Tarrant High School in St Andrew yesterday after completing a welding job in preparation for back-to-school next week. The three are welders and past students of the school. - Norman Grindley/Chief Photographer
1
2
3

There have been pleas for teachers and the book industry to have mercy on parents whose children will be faced with textbook increases as high as 85 per cent for the new academic year.

The 2014 Consumer Affairs Commission (CAC) Annual School Textbook Survey, which took place between July 29 and August 7, 2014, showed an 85 per cent increase in the price of the secondary-level text Mastering World Religions by Ray Colledge, which jumped from J$2,414.50 last year to J$4,456.67 this year.

The survey captured data from 49 of 71 outlets that were targeted.

In an interview with The Gleaner yesterday, chief executive officer of the CAC, Dolsie Allen, made reference to the study, which showed an average increase of secondary-school books being 12 per cent, while the average hike recorded for primary- and infant-level texts islandwide was four per cent.

She said the commission was very concerned and begged for consideration to be given.

"We are aware that everyone wants to make a profit and that vendors themselves are experiencing hard times as a result of the sliding dollar, among other factors, but if the books are overpriced, nobody wins, and so I'm asking that consumers get a break," she declared.

"Though 12 per cent was the average price increase across the board, in the scheme of things, the inflation rate is nine per cent based on information we got from STATIN (Statistical Institute of Jamaica) and so that figure (12 per cent) for any consumer, in our minds, is still significant," she continued.

She added, "When we add the 10 per cent increase last year, with 12 per cent this year, that equals 22 per cent increase that the average consumer would have encountered in just one year, which is really a tough hurdle for anyone to overcome," she declared.

"This reinforces the ministry's perspective that the book list should be kept to a minimal. Parents should not be pressured to buy any book that is not immediately required," the minister told The Gleaner.

"I am pleased with those schools and teachers that have been following the ministry's directive, but I am frowning at those institutions that have been inconsiderate and disobedient. This (the study) is the clearest indication, for all the reasons that we know, that there should be extreme restraint in requiring many textbooks."

The minister pleaded, "Can we be reasonable with each other?"

Book Industry Association of Jamaica board member Franklyn McGibbon recently insisted that price increases, which he has blamed almost entirely on the slide in value of the Jamaican dollar, will range between 22 and 26 per cent.