Hell of a beating 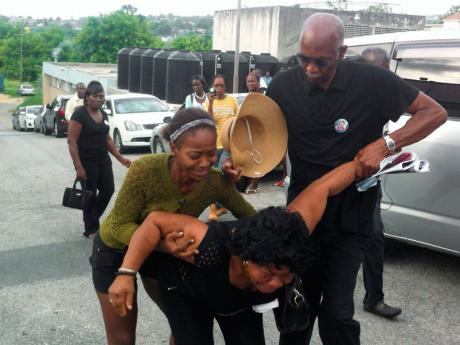 Mario Deane's aunt, Evadney Hamilton, broke down in tears and is being assisted by two bystanders moments after her nephew's body was removed from the morgue to a waiting hearse yesterday. - Photo by Adrian Frater

"He died from multiple impact to the face, head, and brain," said Baden, who carried out the much-anticipated autopsy alongside his local-based counterpart Dr Murari Saranji. "He had two broken bones in his face."

In giving details about the severity of the injuries he saw and the possible causes, Baden said while he could not yet conclude if any of blows was as a result of being struck by a baton or another object, there was clear evidence that he was punched many times.

"He was punched many times … . He died as a result of a beating … . There were severe injuries to the back of his head and his neck … . This was a homicide," stated Baden, who noted that while there were marks on the dead man's wrist, the possible cause could not be determined until photographs taken of the body are examined in greater detail.

With regard to the two broken bones in Deane's face, Baden said those were not consistent with being punched, but he noted that they could have been the result of his head being slammed into a concrete wall.

The autopsy, which started at approximately 11 yesterday morning, attracted numerous persons from the Rosemount community, where the deceased man resided at the time of his death. There was also a strong detachment of uniformed policemen on hand.

At approximately 2 p.m., the head of the western Jamaica branch of the Independent Commission of Investigations, Errol Chattoo, who watched the early stages of the examination, described what he had seen as meticulous.

" … When I was leaving, they had already completed the external examination to include the spinal cord and were moving on to the brain," said Chattoo.

Following the conclusion of the autopsy, the deceased man's aunt, Evadney Hamilton, broke down in tears as the body was moved from the morgue to a waiting hearse to be transported back to a funeral home.

Following a formal request made to the Police High Command by Dennis Meadows, the co-convenor of the advocacy group Citizens Action for Principle and Integrity, permission was granted for Baden to visit the cell at the Barnett Street Police Station, where Deane was allegedly beaten on Sunday, August 3.

"We think it is very important that Dr Baden gets a chance to view the cell where the incident took place," said Meadows. "What he sees there might … help him in making his conclusions at to what may have caused the injuries Mario suffered."

Baden was joined on his visit to the jail cell by attorney-at-law Miguel Lorne, who is representing the family of the deceased man, and Sadiki Deane, Mario's sister.