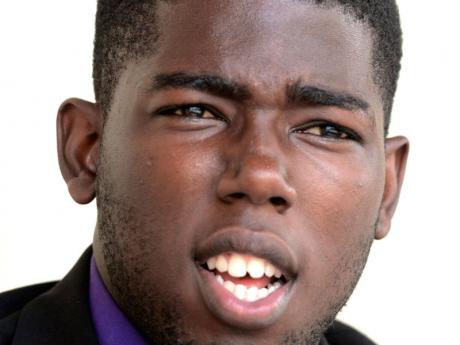 Keimo Edwards reflects on how PALS has helped him to overcome his grief after tragically losing his mother. He said he now forgives her killer.

May 24, 2010 is indelibly etched in the mind of Keimo Edwards; it's the day his mother's life was taken.

'Pet', as everyone called her, was shot during the infamous Tivoli incursion. More than 70 persons were killed in the May 2010 operation by the security forces in Tivoli Gardens, Kingston. To the best of Edwards' knowledge, the shooter was a member of the Jamaica Defence Force (JDF), an organisation he dreamed of joining.

"The JDF always painted a good image," he said. "But as it relates to the police force, as yuh see dem, yuh start fret."

Edwards recalled he was even locked up once, for reasons still unknown.

"I guess it was because I was from Tivoli," he laughed.

So it was not surprising to Edwards when his mother made him leave Tivoli once it was clear there would be a stand-off.

"She stayed back because my uncle was there and he had nowhere to go," he recalled. It was that uncle who related the tragic news. As he tells it, Pet was shot while heading to church; she felt she would be safer there.

"He said she was going to the church to lie down on her belly and pray," Edwards recalled. When he got the call, he was in disbelief. He admitted he had not prayed in a long time before the incursion, as his life was going fine. The incident decimated his idyllic life.

"All faith in God and every thing was lost immediately," he said.

TIME TO GET HELP

Time passed and Edwards returned to school. There were counselling sessions for traumatised students, but he never attended. He didn't consider himself traumatised because, being from west Kingston, he felt he was used to violence and its aftermath. One day, reality kicked in and Edwards broke down in tears during class. It was time to get help.

In stepped PALS (Peace And Love in Society). The organisation hosted counselling sessions, led by its general manager, Janilee Abrikian. At first, Edwards thought it would be the "ordinary" (aka boring) sessions.

"But when they said we could even use expletives to express ourselves, I felt this could really be different," he said. Gradually, he learned "forgiveness is really for me, and not the other person".

The intervention was timely. Edwards admitted many crazy ideas went through his head, including how to bomb the JDF's base.

"I'm a smart person and I've always loved the sciences, so I thought about it," he said. "I even asked my physics teacher how a bomb could be made."

He wanted to join the army, find his mother's killer and get his revenge. But Abrikian and PALS taught him that every choice brings consequences, and slowly, the bitterness diminished.

"I tried to accept the fact that he (the soldier) was just doing his job," said Edwards, who is also a cadet. "I know when orders are given, you must carry them out."

At the counselling sessions, his turnaround in attitude didn't initially sit well with others who had been abused or witnessed friends and relatives being killed in the incursion. They branded him "informer" and "cadet bwoy". But Edwards was undeterred; he had found a new path.

"When mom died, every night I went to a party, and I would be hanging out at places with guns and those things," he said. "But I realised that life was not for me, and if I stayed with it, it would not be a good end."

PALS has taught him discipline, how to control his temper, and how to be a leader - in short, every aspect of his life.

PALS is part-beneficiary of next week Saturday's Gleaner 180 5K Run. He may not be able to participate, but Edwards is happy to assist PALS because he knows the help they give.

"How the message is brought about is just different. You feel more comfortable … . You really connect."

Now 19, Edwards works as a cheque file clerk at Scotiabank, while furthering his education.

But what about being a soldier? He said that is still in his plan.

Having secured seven subjects at the Caribbean Secondary Education Certificate level, he's now going for his Caribbean Advance Proficiency Examinations qualifications, as he wants to qualify for the officer's level. And he'll never forget the organisation that kept his dream alive.

"PALS can help and transform Jamaica," he said confidently. "PALS can make the difference."