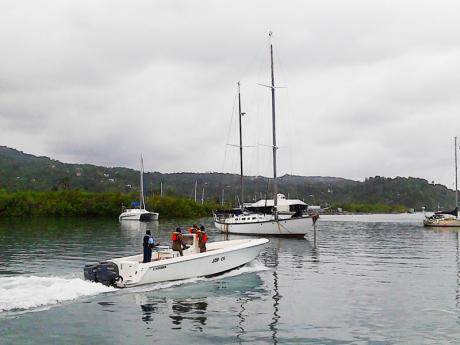 Members of the Jamaica Defence Force Coast Guard yesterday launched a search at sea off the coast of Portland for the ill-fated aircraft.

JAMAICA BECAME the final destination for American real estate developer Larry Glazer and his wife, Jane, after their single-engine aircraft flew unmanned for several hours across sections of the United States (US) and the Caribbean before crashing off the coast of Port Antonio, Portland, yesterday.

The search for the Glazers by personnel from the Jamaica Defence Force (JDF) and the Marine Police, supported by their US counterparts, went late into the evening and was called off at nightfall. It was expected to resume at daybreak.

JDF civil military cooperation officer, Captain Basil Jarrett, told journalists at a press conference at the army's Up Park Camp headquarters that the search was concentrated around an oil slick in the area believed to be the crash site.

"Our latest information is that an oil slick indicative of where the aircraft may have gone down has been spotted in the area where we suspect the crash took place, and our search-and-rescue technicians continue the search for possible survivors," said Jarrett.

The JDF also revealed that a US Coast Guard cutter vessel is expected to arrive in the island today to provide assistance with the search.

The couple's three children - Mindy, Rick and Ken - also released a statement saying they were devastated by the news of the crash.

"We understand that there are many questions yet to be answered about today's (yesterday's) events and we, too, are awaiting answers," the statement noted.

However, the US Federal Aviation Administration (FAA) reported that just over an hour into the flight, air traffic controllers lost contact with the pilot.

As a result, the FAA said two fighter jets were dispatched to track the aircraft and one of them reported seeing its pilot slumped over in his seat.

The Jamaica Civil Aviation Authority said there are indications that the pilot had lost consciousness and that air traffic controllers in Kingston soon became aware that the "unpiloted" aircraft was heading into Jamaican airspace.

Jarrett said the army was alerted to the aircraft by US authorities shortly after midday and immediately took steps to keep track of it.

"It was reported that the aircraft crashed at approximately 1:10 p.m., 14 nautical miles north east of Port Antonio," he reported.

This set off a frenzied search by the JDF Coast Guard and the Marine Police, who were supported by a US surveillance plane.

Records show that Larry Glazer is the chief executive officer and managing partner for Buckingham Properties, located in Rochester.