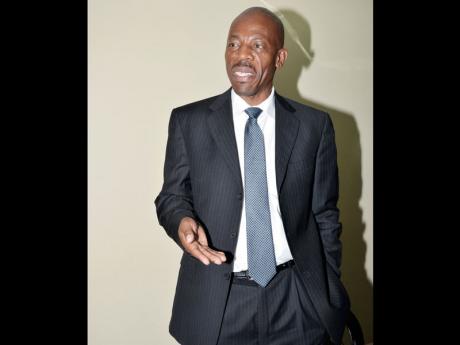 Commissioner of Police-designate Carl Williams at his Oxford Road office in St Andrew yesterday, shortly after his appointment was announced. Norman Grindley/Chief Photographer

Int'l partners give thumbs up to top-cop selection

SOME OF Jamaica's major international partners have given their stamp of approval to the appointment of career cop Carl Williams as the country's next police commissioner, government insiders have revealed.

"There were wide consultations with all the major partners and that was done based on past experience," one insider told The Gleaner yesterday, shortly after the national security ministry announced that Williams would take up duties next Monday.

Other government sources revealed last night that Williams, who now heads the tough crime portfolio, narrowly got the nod over assistant commissioner of police in charge of Area 5 Novelette Grant, who also had the blessing of all international partners.

"It was very close. Both of them are very strong candidates and they are squeaky clean, but in the end it was Williams who was given the nod," one source revealed.

The question of international support for the Jamaica Constabulary Force (JCF) and crime-fighting initiatives surfaced in the days after former police commissioner Owen Ellington shocked the nation with his sudden retirement.

Christopher Degnan, public affairs officer at the United States (US) Embassy in Kingston, told The Gleaner in July that his Government contemplated

taking strong action in response to reports of extrajudicial killings by members of the JCF and warned that it was keenly watching developments in Jamaica.

"The US assistance in support of the JCF is under review because of allegations of JCF involvement in extrajudicial killings," he told this newspaper then.

But apparently seeking to address those concerns, the national security ministry underscored that the new commissioner would be mandated to continue the process of the "professionalisation" of the JCF with special emphasis on respect for human rights.

"Commissioner-designate Williams takes office with the full support of the ministry and the Government. The JCF is expected to continue making progress in the fight against organised crime and corruption under his leadership," the ministry said in a statement.

The 50-year-old Williams will take over as the country's 48th police commissioner after a 29-year career, during which he helped to develop and kick-start two of the more elite and successful units in the JCF - the Major Organised Crime and Anti-Corruption Task Force (MOCA) and the Lottery Scam Task Force. He has also held several supervisory and command positions at the station, division, and area levels.

In addition, as a former narcotics chief, Williams was responsible for the implementation of numerous strategies aimed at reducing the supply of illegal drugs in Jamaica and led several initiatives that targeted domestic and international players in the narcotics trade.

While expressing support for Williams' appointment, the parliamentary Opposition urged him to pay attention to the perceptions of corruption and violence in the JCF.

"He must seek to remove the smear of corruption from the JCF, as well as the perception that there is no deeply held respect for the human and civil rights of ordinary Jamaicans," Opposition Spokesman on National Security Derrick Smith said in a statement.

"The JLP (Jamaica Labour Party) expects the commissioner to be fearless and objective in fulfilling his mandate and not to allow the force to be used in the pursuit of any agenda which is counter to the general interest of the society," he added.