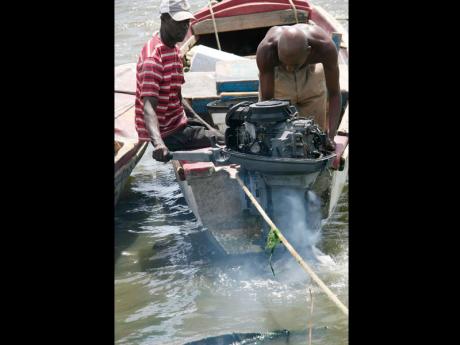 After returning to port, the fisherman at right tries to flush some of the sludge from his outboard engine by revving it hard and consistently as a friend looks on.-Photo by Christopher Serju

Fishermen are claiming the recent unexplained deaths of hundreds of crab, shrimp and small fish in a nursery area at the New Causeway Fishing Complex near Jamworld in St Catherine is being caused by a toxic substance discharged from a processing facility along Spanish Town Road in Kingston.

The fishermen told The Gleaner that the greasy substance, more of which has been washing ashore at the complex over the past three weeks, is industrial sludge, which has damaged a number of boat engines and is posing a threat to their health, safety and livelihood.

In response to complaints from the fishermen, the National Environment and Planning Agency (NEPA) dispatched an officer to the beach, who collected samples and told The Gleaner that laboratory results should be available some time this week.

"We do not yet know the source of the substance," Dionne Rose, NEPA's manager of public education and corporate communication, told The Gleaner.

However, the fishermen, who say they go much further out to sea for their fishing, insist that the issue of the chemical pollutant being discharged into the harbour from the facility is a longstanding one which has intensified over recent days.

Meanwhile, the Fisheries Division of the Ministry of Agriculture and Fisheries is also investigating the matter and last Tuesday sent an officer to the beach to also collect samples.

Ian Jones, acting director of marine services, told The Gleaner that another government agency, such as the Veterinary Division in the ministry, or the Scientific Research Council, would be enlisted to aid in analysing the material, since it does not have a laboratory.

Jones, too, was unable to provide any information on the source of the pollutant.

When The Gleaner visited the beach last Wednesday, Donald 'Screechy' Wallace, who has been a fisherman for more than 20 years, explained that he was very lucky to get back to shore after venturing out to sea the day before, as the engine almost burnt up, after some of the sludge caused the boat to overheat and stop running.

"Me haffi wait 'til the engine block cool down, and by the time I start it again, it shut off again," he said.

Eventually, the fisherman was escorted to shore by friends.

Another fisherman, Felton Dwyer, said his engine also malfunctioned after being blocked by sludge earlier in the week.

Dwyer, who has collected some of the sludge in a gallon-size container, said an attempt was being made to clean the shoreline by collecting all the pollutant, as well as other garbage, and burning it.

He said that even though the garbage was wet, it still burns relatively easily because of the combustive nature of the sludge.