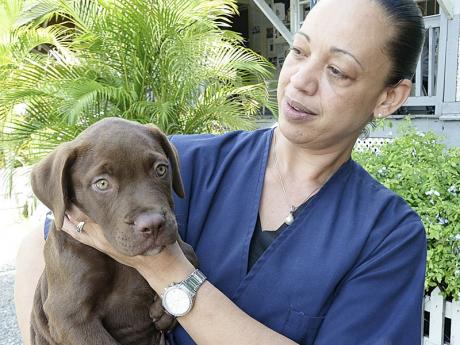 Pamela Lawson, general manager of the Jamaica Society for the Prevention of Cruelty to Animals, holds a young pit bull terrier.-File 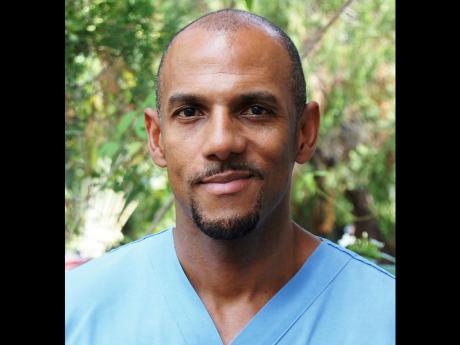 Fake veterinarians are doing more harm than good to the animals they treat, while biting into the livelihood of registered professionals and putting the health of the general public at risk.

"Now you will have a farmer who has a cow that is sick. You don't know what is wrong with the cow, but somebody comes and gives the animal an injection of some drugs, let's say an antibiotic, but they don't know how to calculate a proper dosage, etc," Cadogan told The Sunday Gleaner.

"The animal is not doing well and the farmer decides that 'I can't lose my money so I'm going to slaughter this animal', and that ends up on people's tables. That's a threat to public health because that animal that has a drug in him has not gone through the proper withdrawal period, etc, which a veterinarian would be able to advise on," added Cadogan.

Dr Osbil Watson, chairman of the minister of agriculture-appointed Veterinary Board, which is the regulatory body for veterinary professionals and responsible for administering the Veterinary Act, is also concerned about the threat posed to public safety.

"A large percentage of emerging and re-emerging diseases that affect humans, such as Ebola and mad cow disease, are pretty much caused by animal pathogen," noted Watson.

"Around 70 per cent or so of diseases that affect animals can affect humans. It is important, therefore, to have your veterinarians to safeguard human health and make sure the animal population remains safe and free from disease."

Watson argued that members of the public have to take some of the responsibility and educate themselves on who is registered as a professional in a particular area.

"A veterinarian has to be trained, has to have a veterinary degree of doctor of veterinary medicine and be registered by the board," said Watson, who is also director of the Veterinary Services Division.

"We also publish annually a list of registered veterinarians that can practise veterinary medicine legally in Jamaica. By law, a list is to be published annually, and this is done, so it is also a person's duty to ensure that someone don't come to them and say they are veterinarians and can treat their horse for them and they don't say, 'Where is your ID? Where are your credentials'?"

The growing problem of persons providing veterinary services without a licence was brought to the fore recently when it was reported that a veterinarian stabbed the mother of his child to death.

The Jamaica Veterinary Medical Association has distanced itself from the man, saying he is one of many impostors who have for years operated illegally as vets.

"It's something that has been festering for quite some time," shared Cadogan, who is based in Clarendon. "It's a very complex issue and there are so many factors involved and different forms of what has been going on.

"There are different levels of this illegal practice. You have personnel who have absolutely no training whatsoever. They just might have picked up something because they worked on a farm or something, and they end up going and doing things on people's animals.

"You have persons who were once clinic assistants working with vets, assisting them in their practices; they learn a few things and then they leave that work and start doing things on their own."

Animals suffer tremendously at the hands of these unscrupulous individuals who, in some instances, administer drugs without being able to make proper diagnosis.

Pamela Lawson, general manager of the Jamaica Society for the Prevention of Cruelty to Animals, says her organisation sometimes has in excess of 90 clients coming through their doors with some persons taking in up to 10 animals, many of which were previously seen by the fake vets.

"We know that the problem exists, and when one is required to take action to stem the problem, it is not done until it becomes a major issue, and that is really what is happening here. It is a chronic problem in Portmore and Kingston, and I mean chronic," declared Lawson.

"Everybody is a 'vet'. They are giving injections and they are giving the wrong dosages. There are many animals we have to do emergency C-sections on monthly. And the reason we have to do spay, where we remove all the reproductive organs, is because they are pumping drugs into these animals to force them to have contractions, ruining the uterus, and the animals are a mess."

Another severe problem identified by Cadogan is that of these untrained persons without clinical knowledge having veterinary drugs in their possession. This, he said, speaks to the need for better regulation and control of these potentially dangerous substances.

"Somebody unqualified can get their hands on things like antibiotics, anti-inflammatories, hormones and things like that, and they can buy needles and syringes and go out there and do their thing," declared Cadogan.

See related story of Page A10