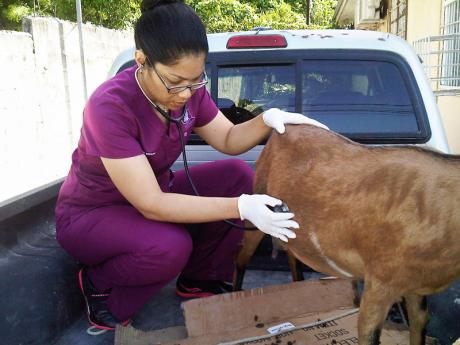 Untrained persons operating illegally as veterinarians are charging high prices for their services and dipping into the possible income of the 100 trained vets licensed to operate in Jamaica.

Dr Gavin Bellamy, head of aquaculture in the Ministry of Agriculture Veterinary Services Division, says the fake vets are getting away because their victims fail to report them.

"The presence of these illegal vets has been affecting the livelihood of the registered vets. Unfortunately, there are a lot of them in Jamaica now," said Bellamy.

"A lot of times when it becomes a problem and you ask the people affected by these people to make a formal complaint, no one will do it, and that is where the limitation is," added Bellamy.

Fear is said to be a major factor in persons' reluctance to expose these impostors, and persons in the field say there have even been instances where trained vets have been threatened when they try to set up shop in areas where quacks operate.

"I have been threatened in areas where I have worked by non-veterinarians telling me not to come back there because that's where they work. That has happened in St Thomas and other parishes," said one vet who asked not to be named.

Dr Laura Williams, who has been practising for more than 10 years in Montego Bay, St James, believes that fake vets have become more barefaced of late, and this has been partly due to the ignorance of their clientele.

"Some of these people have quite a big clientele, and when you talk to these people, it is just a lack of knowledge because they don't really know that these people are not veterinarians," Williams pointed out.

"In certain communities, people don't really know the qualifications that a licensed veterinarian should have, and they actually do think that the persons who are seeing their animals are veterinarians. They pay good money; sometimes they pay the same that licensed professionals charge, or even more."

Dr Paul Cadogan, public relations officer for the Jamaica Veterinarian Medical Association, anticipates that the situation will continue because the laws which currently exist are too lenient to act as a deterrent.

According to Section 16(1)((d) of the Veterinary Act, which was last updated in 1976, a person who promotes himself or herself as a veterinarian is liable to a fine not exceeding $1,000 or to imprisonment for a term not exceeding two years, or to both such fine and imprisonment.

Section 16 (2) (c) of the act says if somebody lodges a complaint that someone is illegally practising and he or she is convicted, the penalty should not exceed $500 or they should be imprisoned for a term not exceeding 12 months, or both such fine and imprisonment.

"We need laws that have teeth and our Veterinary Act as it currently stands really has no teeth; really, I mean it's laughable," lamented Cadogan.

But Dr Osbil Watson, chairman of the minister of agriculture-appointed Veterinary Board, which is the regulatory body for veterinary professionals and responsible for administering the Veterinary Act, says changes are coming in the very near future.

"The act is in an advanced stage of amendment. We have been working on it for a couple of years now and issues in terms of fines were identified, so those will be addressed."