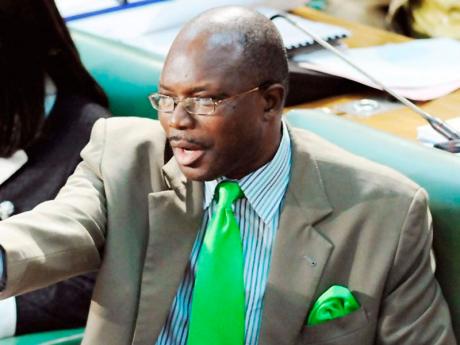 THE PASSAGE of a critical piece of legislation to expunge the records of persons convicted for minor offences was delayed yesterday after Deputy Speaker of the House of Representatives, Lloyd B. Smith, adjourned the sitting prematurely following a stand-off with controversial lawmaker Everald Warmington.

Repeated shouts of "sit down!" by Smith appeared to have fallen on deaf ears as Warmington stood his ground and dismissed appeals for him to refrain from making comments on the Mario Deane case, which is now before the courts.

Pouring scorn on the allegations that "two madman and one deaf man kill the man (Deane)", the opposition member of parliament dismissed calls for him to take his seat. "I am not sitting down … . I am not taking my seat," he said, noting that the police were pointing fingers in the wrong direction.

Construction worker Mario Deane died in hospital on August 6 from injuries he received from a beating at the Barnett Street Police Station in Montego Bay, St James. Two inmates have since been charged with his murder and are before the courts.

"You want to name me? Name me! I am speaking for the people … . Don't tell me to sit down!" Warmington slammed the deputy speaker.

COULD HAVE BEEN EJECTED

If the deputy speaker had named the member, subsequent action could be taken against him, including instructing the marshal to eject him from the House.

In an interview with the deputy speaker after the sudden adjournment, Smith was asked why he chose to end the sitting instead of penalising Warmington.

"I felt strongly that where we had reached was an untenable situation. I could have ruled him out of order and I could have asked the acting House leader to name him, but I don't think that that, in itself, would have achieved much, based on how he was behaving."

Smith said his main concern was that Warmington's behaviour could have escalated to the point where he brought "tremendous disrepute" to the House of Representatives.

Carefully choosing his words outside the precincts of Parliament, the deputy speaker said the South West St Catherine MP was "not completely himself".

National Security Minister Peter Bunting, who was awaiting his turn to close the debate on the Criminal Record (Rehabilitation of Offenders) (Amendment) Act, rose on a point of order. Citing Section 35(2) of the Standing Orders (Rules of Parliament), Bunting charged: "Reference shall not be made to any matter on which a judicial decision is pending, in such a way as might, in the opinion of the chair, prejudice the interests of parties thereto."

According to Bunting, the "member is speaking in a manner that clearly prejudices the parties with interest in this case. He is out of order".