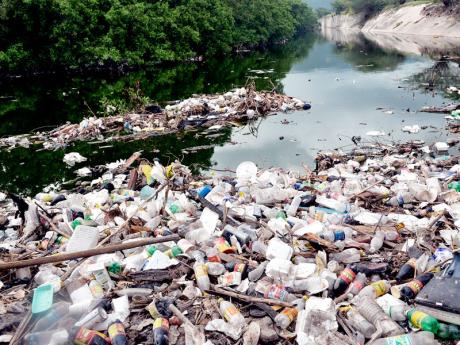 A section of the Sandy Gully in Seaview Gardens, St Andrew, that is littered with garbage. Our photographer battled several mosquitoes as he walked around the area yesterday. - Norman Grindley/Chief Photographer

He said the Jamaica Labour Party and the governing People's National Party must "put their money where their mouths are" and use their capacity and reach on the ground to target large sections of the population through public education, and get persons to join in a massive clean-up exercise.

Dr Dawes said no amount of fogging can solve the problem being caused by the reckless behaviour of some communities and residents who dispose of their garbage and other waste in areas that create large breeding grounds for mosquitoes.

According to the JMDA president, the major political parties had the capacity to spearhead an initiative to help attack the spread of the mosquito-borne disease.

Dr Dawes is of the view that such an alliance to achieve a positive outcome would generate significant support from community groups, the Church, civil society groups, and other stakeholders.

Opposition spokesman on health, Dr Kenneth Baugh, told journalists at a press conference recently that he had suggested to Health Minister Dr Fenton Ferguson to organise a national drive, similar to activities carried out on Labour Day, to help tackle mosquito breeding sites.

Church to get involved

Reverend Conrad Pitkin, president of the Jamaica Council of Churches, is of the view that all stakeholders should get involved in the fight against the chikungunya virus.

He told The Gleaner that the Church had possibly the largest community of persons across the island and their input in terms of a clean-up exercise would go a far way in tackling the problem. "We have started the education process in our congregations in Sabbath and Sunday services," Reverend Pitkin explained, adding that he took 15 minutes out of his services to speak to his audience on cable TV, urging them to keep their environment free from materials that could become breeding sites for mosquitoes.