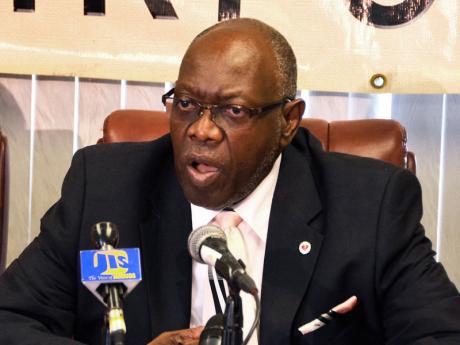 AMID GROWING anxiety over the outbreak of the chikungunya virus (Chik-V) in Jamaica, Health Minister Dr Fenton Ferguson delivered a sobering reminder last night that the number of cases is expected to spike before they start trending down.

However, Ferguson used a nationwide broadcast last night to give the assurance that the nation's already stretched public health-care system will be ready to handle the increase.

"We expect that the health workforce will also be impacted, and so we are putting in place an emergency response plan to ensure that we can continue to provide care to the population," he revealed.

"While I understand the concern and anxiety of Jamaicans over this new illness, I am worried that important messages [about Chik-V] are being lost in the sea of misinformation that has been circulating," Ferguson said.

He acknowledged that the Government must, and has been, leading the efforts to reduce the spread of the disease but insisted that in the end, the fight to contain it has to become the personal responsibility of every citizen.

"I urge you to take at least 10 minutes each week and look around your home, your school, your workplace, your church, and ensure that there is no uncovered container with water that could breed mosquitoes," he emphasised.

"Let us take charge of our health," he continued.

Ferguson and the Portia Simpson Miller administration have been facing mounting criticism for their handling of the Chik-V outbreak. Many persons, including members of the Opposition Jamaica Labour Party, have charged that the Government's response was slow and that the 35 confirmed cases were grossly underreported.

The health minister acknowledged that based on information collected from several communities and private physicians, there are "a number of cases" involving persons with Chik-V symptoms - fever, joint pain, and rashes - "in excess of what has been officially reported and which would not form part of the official numbers".

"We continue to investigate as we have an interest in determining all the types of viruses that are presently circulating," he said.

Ferguson, however, defended the Government's handling of the outbreak, pointing out that since June, vector-control activities have been conducted in 977 communities; just over 50,000 premises have been inspected for such sites; that activities to identify and destroy mosquito-breeding sites were conducted in 484 communities.

In addition, he said the Government is aware of the impact the Chik-V outbreak is having on productivity and school attendance and implored employers to be compassionate and assist their employees through the illness.

The health minister again signalled that a national clean-up day is coming and urged every Jamaican to join in when the date is announced.