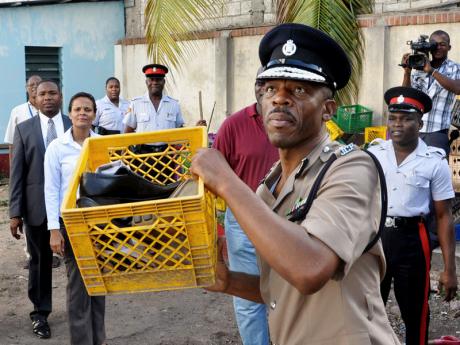 With a small number of police personnel and detainees displaying symptoms of the chikungunya virus, the leadership of the Jamaica Constabulary Force (JCF) yesterday embarked on a massive clean-up drive at police facilities nationwide.

Police Commissioner Dr Carl Williams revealed that the number of police personnel affected by Chik-V symptoms is well below the national average and underscored that the clean-up exercise was among a number of measures being undertaken by the JCF to contain the spread of the virus among members and detainees.

"The police have been affected but not to the extent that we are closing down our operations," Williams insisted as he helped to clear debris at the Half Way Tree Police Station, the headquarters of the St Andrew Central Division.

"We have been able to feed our patrols and carry on all the functions that we do and it's because we have been taking care of our surroundings," he continued.

Other high-ranking members of the JCF, including the four deputy commissioners, fanned out across the Corporate Area and St Catherine to supervise the clean-up efforts.

By the end of the day Assistant Superintendent Tanisha Ellison, who is attached to the JCF's Corporate Communications Unit, said several police divisions and formations across the country had reported removing huge piles of garbage and cleared a number of drains that were mosquito-breeding sites.

Williams said the clean-up operations would continue on a regular basis.